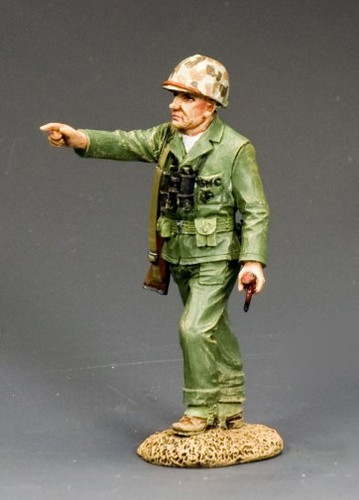 King & Country Soldiers USMC059 Lieut. Col. Lewis 'Chesty' Puller USMC. This latest WW2 U.S. Marine figure portrays the legendary 'Chesty' Puller as he would have appeared during the Pacific Campaign Leading his men, as usual, from the front and pointing the way. Slung over his right shoulder is his M1 Carbine and in his left hand the ever-present pipe! Lewis Burwell 'Chesty' Puller (1898-1971) was a United States Marine Corps officer who began his military career fighting guerillas in Haiti and Nicaragua during the 1920s. After service in Central America he was posted to China and led a unit of 'China Marines' before sea duty on board the USS Augusta, a cruiser of the Asiatic Fleet. In September 1941 he was given command of the 1st Btn., 7th Marines stationed in North Carolina. After America's entry into WW2, and promoted to Lieutenant Colonel, 'Chesty' Puller led his forces on Guadalcanal to eventual victory there and was awarded his third 'Navy Cross'. His two previous crosses had been won during his earlier tours of duty in Central America. He was to go on to lead Marines on the long protracted battle to capture Pelelieu, one of the bloodiest battles in Marine Corps history. At the outbreak of the Korean War in 1950 Puller was given command of the 1st Marine Regiment and took part in the successful amphibious landing at Inchon as well as leading his marines during the epic fighting withdrawal that became known as the Battle of The Chosin Reservoir where he was once more awarded the Navy Cross, his fifth and the Distinguished Service Cross. In January 1951 he was promoted to Brigadier General and appointed Deputy Divisional Commander of the 1st Marine Division. After the Korean War ended 'Chesty' Puller commanded the 2nd Marine Division before finally retiring as a Lieutenant General. His nickname was related to his personal appearance because of his barrel chest. That and his aggressive stance were well-known throughout the Marine Corps and often commented on. 'Chesty' Puller won America's 'Distinguished Service Cross' once as well as five 'Navy Crosses' (one of only two such persons so honoured). In addition he was awarded a 'Silver Star', a 'Bronze Star' and many other campaign and service medals for his long and valiant military commitment to his country and the United States Marine Corps.
This product hasn't received any reviews yet. Be the first to review this product!
Write a Review