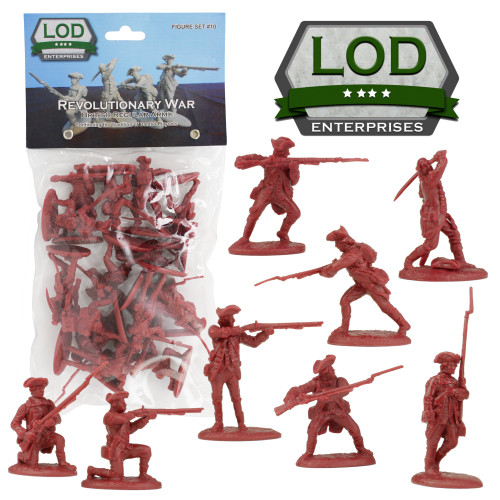 LOD Enterprises Barzso Figure Set 010 American British Army Revolutionary War (brown). Plastic Toy Soldier Figure set 54mm 1/32 scale. This plastic set includes sixteen (16) pieces . LOD Enterprises is the premier manufacturer of high end collectible plastic toy soldiers. The American firm, based in Green Bay, WI, has deep respect for the rich history Toy Soldier tradition and draws on past to deliver the toy soldiers of the future. LOD Enterprises was founded by collectors for collectors. Therefore, LOD Enterprises maintains the highest standards for their products. By using high quality materials and dedication of historical accuracy is their designs, LOD toy soldiers has quickly developed a dedicated following. Never satisfied with past success, When General George Washington assumed command of the Continental Army outside of Boston, Massachusetts, on July 2, 1775, he dreamed of transforming it into a disciplined, European-style force capable of meeting British regulars on an equal basis. Realizing that goal eluded Washington's best efforts in 1775 and 1776. At that time, Continentals enlisted for terms lasting no more than a year. That left a man free to take his discharge as soon as he had mastered his duties, leaving Washington to raise a new army from scratch and provide it with some hasty training before the next campaign season opened. No wonder the Redcoats and Hessians routinely defeated the Continental Army and chased it out of Long Island, Manhattan, and New Jersey by the end of 1776. Washington's troops often broke and ran in the face of their opponents' most terrifying tactic - the bayonet charge.

​From 1777 on, however, Continentals signed up for three years or the war's duration, which gave Washington a long-term force that he could finally mold into a real army. Extendedenlistments did not appeal to prosperous farmers, and the Continental Congress deliberately recruited men from poorer backgrounds by offering cash bonuses (bounties) and postwar land grants that promised veterans the chance to enjoy the 18th-century version of the American dream. These new Continentals soon demonstrated their potential. Although Washington's Main Army could not prevent the British from taking Philadelphia, it fought stubbornly at Brandywine and Germantown, retreating in an orderly fashion rather than fleeing in panic. At Saratoga inupstate New York, other Continentals defeated and captured an entire British army, winning the decisive victory that brought France into the war as an ally to the infant United States.