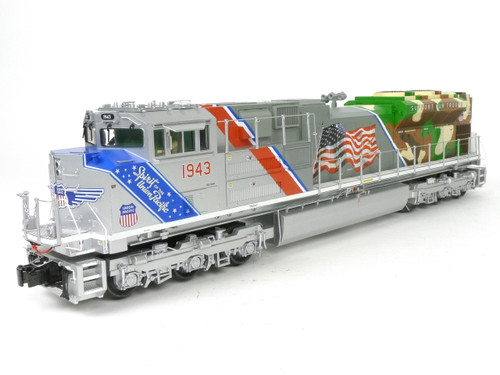 In 1943 thousands of Union Pacific employees voluntarily increased their War Bond payroll deductions to fund the construction of a heavy bomber. To honor their efforts, a new Boeing B-17 was christened Spirit of the Union Pacific. On its fifth mission, led by Captain Robert Short, it was shot down in a raid on enemy installations at Munster, Germany. Short and most of his crew parachuted to safety. Nearly three-quarters of a century later, October 2017, the Union Pacific unveiled SD70AH diesel No. 1943 (an SD70ACe with extra weight to improve traction), in tribute to the United States armed forces and “spotlighting the Union Pacific’s relationship with thousands of veterans who helped build America after defending the United States.” Named after that original B-17, No. 1943’s paint scheme was created in collaboration with Union Pacific veterans honoring every branch of the U.S. armed forces. The front of the locomotive is painted in Air Force Silver, emblazoned with the blue “nose sash” of the former Strategic Air Command. The lettering inside the sash is the original hand-drawn font used on the Spirit B-17. In contrast, all engine numbers are in a military-style block font. Behind the cab is the Coast Guard’s “Racing Stripe,” followed by the Navy’s Battleship Gray, framing the Union Pacific's traditional American flag. The military camouflage in the radiator area honors the Army and Marines, and the final message on the rear of the engine is the POW/MIA symbol and its motto, "You Are Not Forgotten."