The Anglo-Zulu War was a six month war fought in 1879 between the British Empire and the Zulu Kingdom in South Africa.

Sir Henry Bartle “Frere, on his own initiative, without the approval of the British government and with the intent of instigating a war with the Zulu, had presented an ultimatum on 11 December 1878, to the Zulu king Cetshwayo with which the Zulu king could not comply, including disbanding his army and abandoning key cultural traditions. Bartle Frere then sent Lord Chelmsford to invade Zululand after this ultimatum was not met. The war is notable for several particularly bloody battles, including an opening victory of the Zulu at the Battle of Isandlwana, followed by the defeat of a large Zulu army at Rorke's Drift by a small force of British troops. The war eventually resulted in a British victory and the end of the Zulu nation's dominance of the region” (Wikipedia). 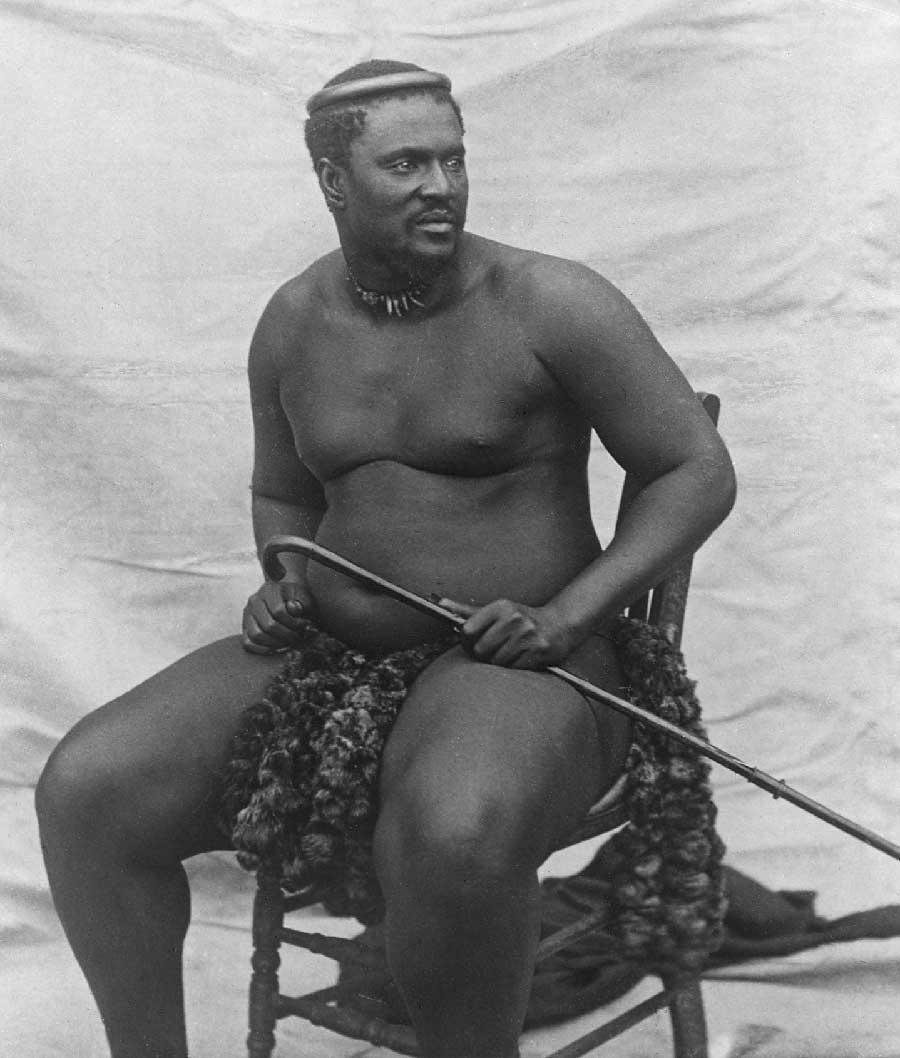 “During the second half of the 19th century, the British were interested in Zululand for several reasons, including their desire for the Zulu population to provide labour in the diamond fields of Southern Africa, their plan to create a South Africa federation in the region (thereby destroying autonomous African states), and Boer land claims (supported by the British) on territory held by the Zulu kingdom. Cetshwayo, who became king of the Zulus in 1872, was unwilling to submit to British hegemony and assembled a well-disciplined army of 40,000 to 60,000 men. In December 1878 Sir Bartle Frere, British high commissioner for South Africa, issued an ultimatum to Cetshwayo that was designed to be impossible to satisfy: the Zulu were, among other things, to dismantle their “military system” within 30 days and pay reparations for alleged insults. As expected, the ultimatum was not met, and in January 1879 British troops invaded under the leadership of Lord Chelmsford. 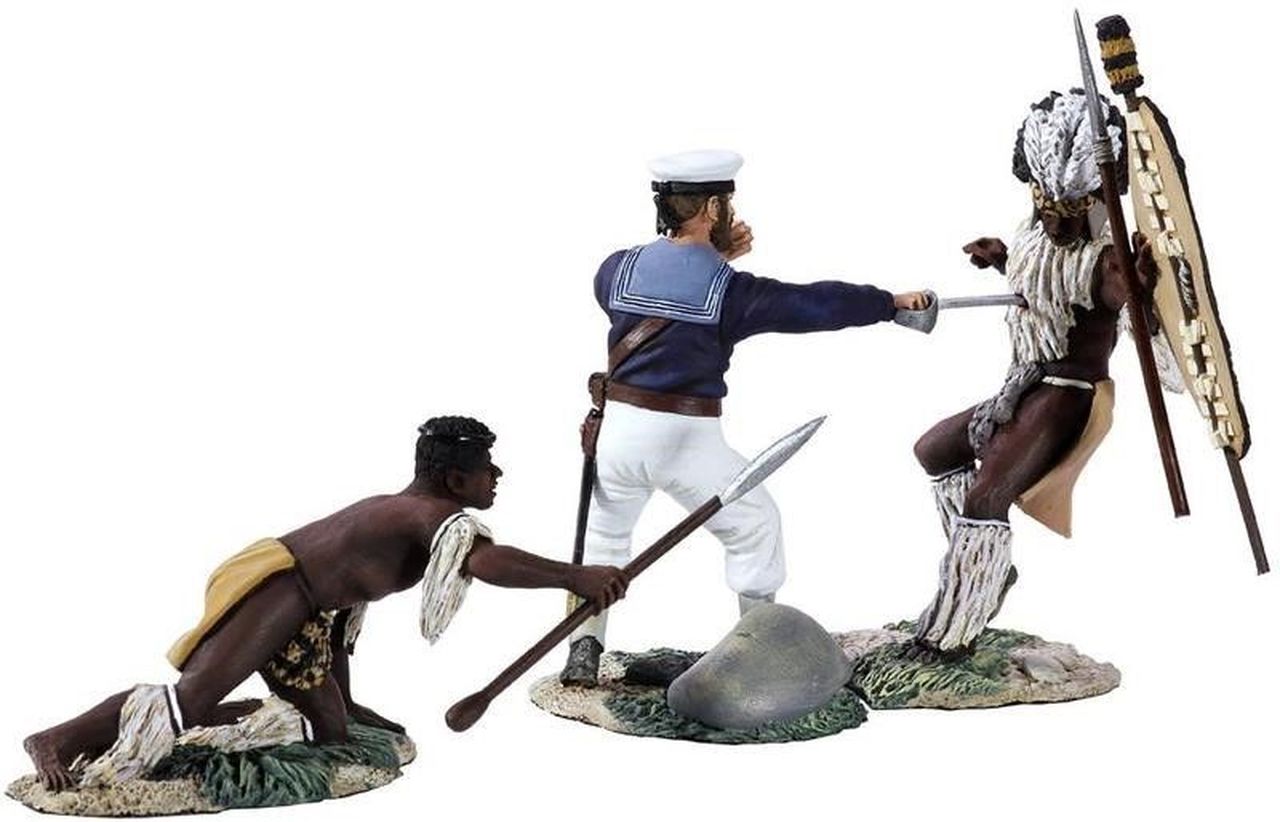 Although the January rains impeded travel and the tall grasses of Zululand blocked their view, the invaders advanced into Zululand without taking normal precautions (such as scouts and sentries). Initially Cetshwayo’s policy had been to hold back his troops, remain on the defensive in this unprovoked war, and hope to negotiate a settlement. However, on January 22 Chelmsford advanced, leaving a third of his force unlaagered (lacking a protective encampment structure) at Isandlwana, and the Zulu army attacked. They annihilated the central British column at Isandlwana, killing 800 British soldiers and taking nearly 1,000 rifles and ammunition. Later that day a second Zulu force, led by Cetshwayo’s brother, Dabulamanzi kaMpande, attempted to overrun the British depot at Rorke’s Drift (known to the Zulu as KwaJimu). This time the British, who had been forewarned by the few survivors of Isandlwana, were prepared. In a firefight that lasted nearly 12 hours and continued into the next day, some 120 British troops shot down more than 500 Zulu fighters. (See also Battles of Isandlwana and Rorke’s Drift.) 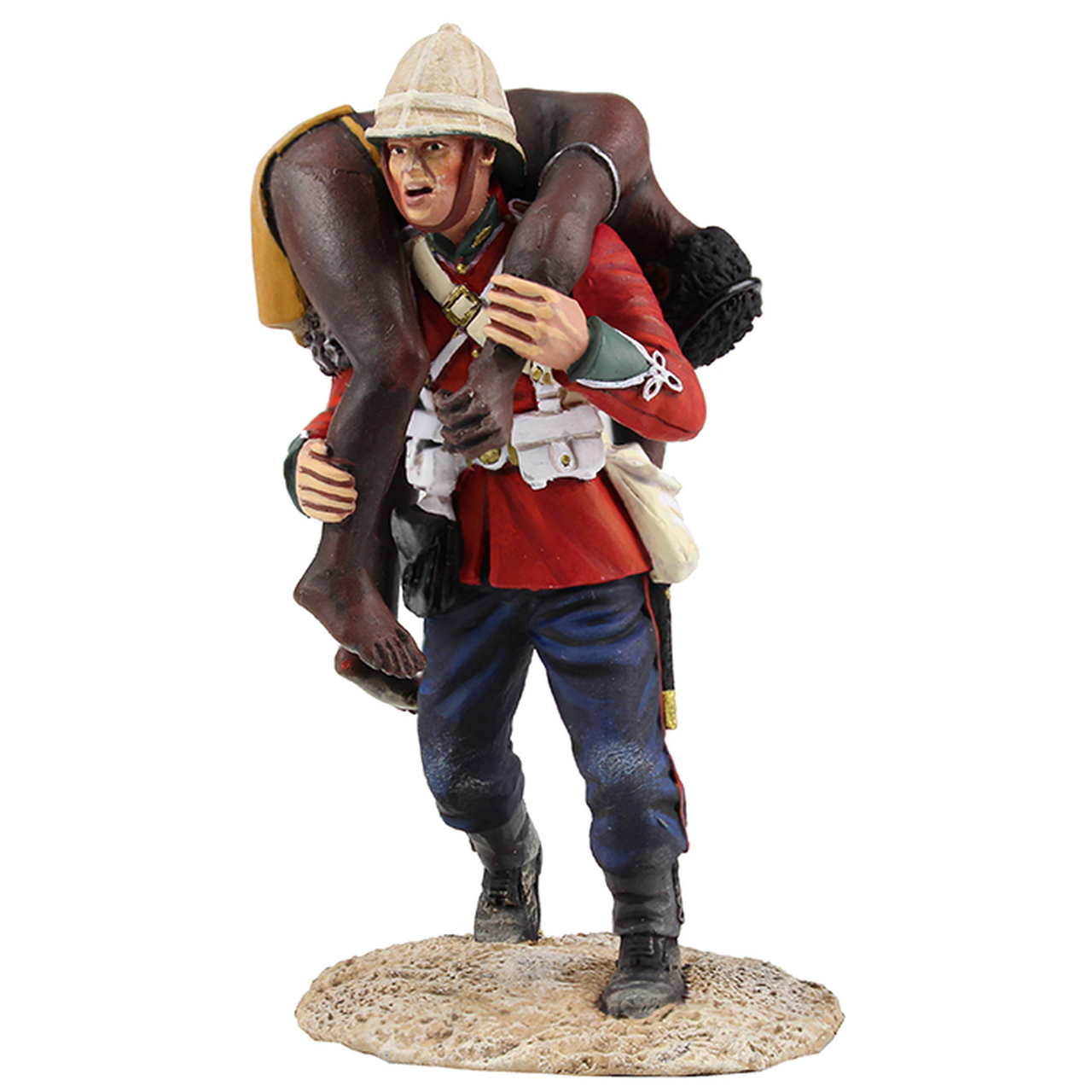 Paradoxically, the Zulu victory at Isandlwana shattered Cetshwayo’s hope for a negotiated settlement. The British government in London had not been fully briefed by Frere about the intended attack on Zululand and initially was not overwhelmingly in the mood for war. However, the arrival of the news of the defeat at Isandlwana in London on February 11—one of the major shocks to British prestige in the 19th century—galvanized the British government into a full-scale campaign to save face. An army led by Col. Evelyn Wood suffered an initial defeat at Hlobane on March 28 but brought about the decisive victory over the Zulu at the Battle of Kambula (Khambula) on March 29. On April 2 a British column under Chelmsford’s command inflicted a heavy defeat on the Zulu at Gingindlovu, where more than 1,000 Zulu were killed. Chelmsford’s troops then moved on Cetshwayo’s royal villages at Ulundi, where on July 4, 1879, they inflicted a final defeat on Cetshwayo’s surviving soldiers. Cetshwayo himself was captured in August, and the Zulu nation was at the mercy of the British government, which had not yet considered how to incorporate Zululand into its Southern Africa holdings” (Encyclopedia Britannica). 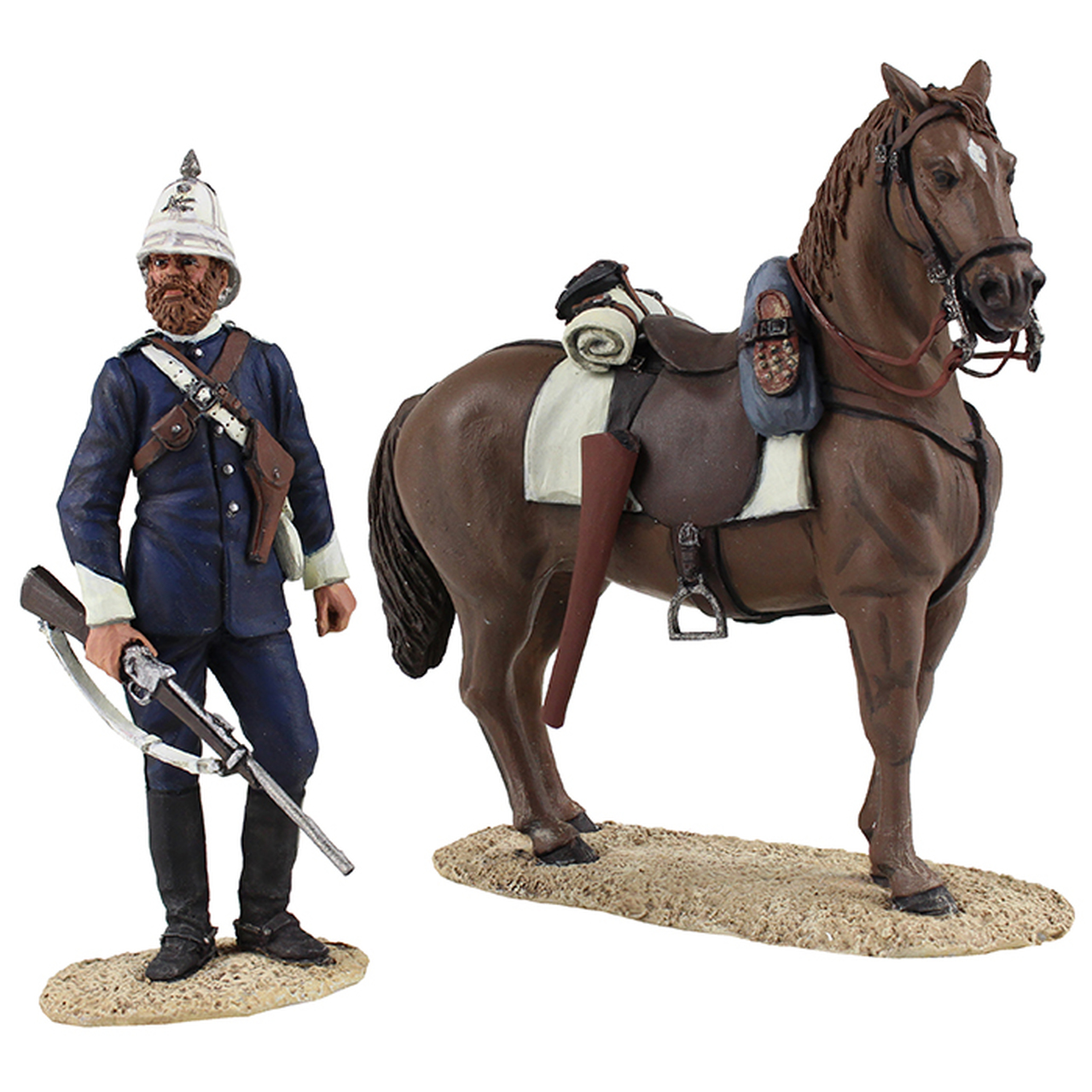 “Britain's eventual defeat of the Zulus, marking the end of the Zulu nation's independence, was accomplished with the assistance of Zulu collaborators who harboured cultural and political resentments against centralised Zulu authority. The British then set about establishing large sugar plantations in the area today named KwaZulu-Natal Province” (Wikipedia). It is nearly the anniversary of the beginning of the Anglo-Zulu War, which started on January 11, 1879. Learn more about the war and the brutal history of British colonialism with the links in the Further Reading section below, and check out our stock of Toy Soldiers online. 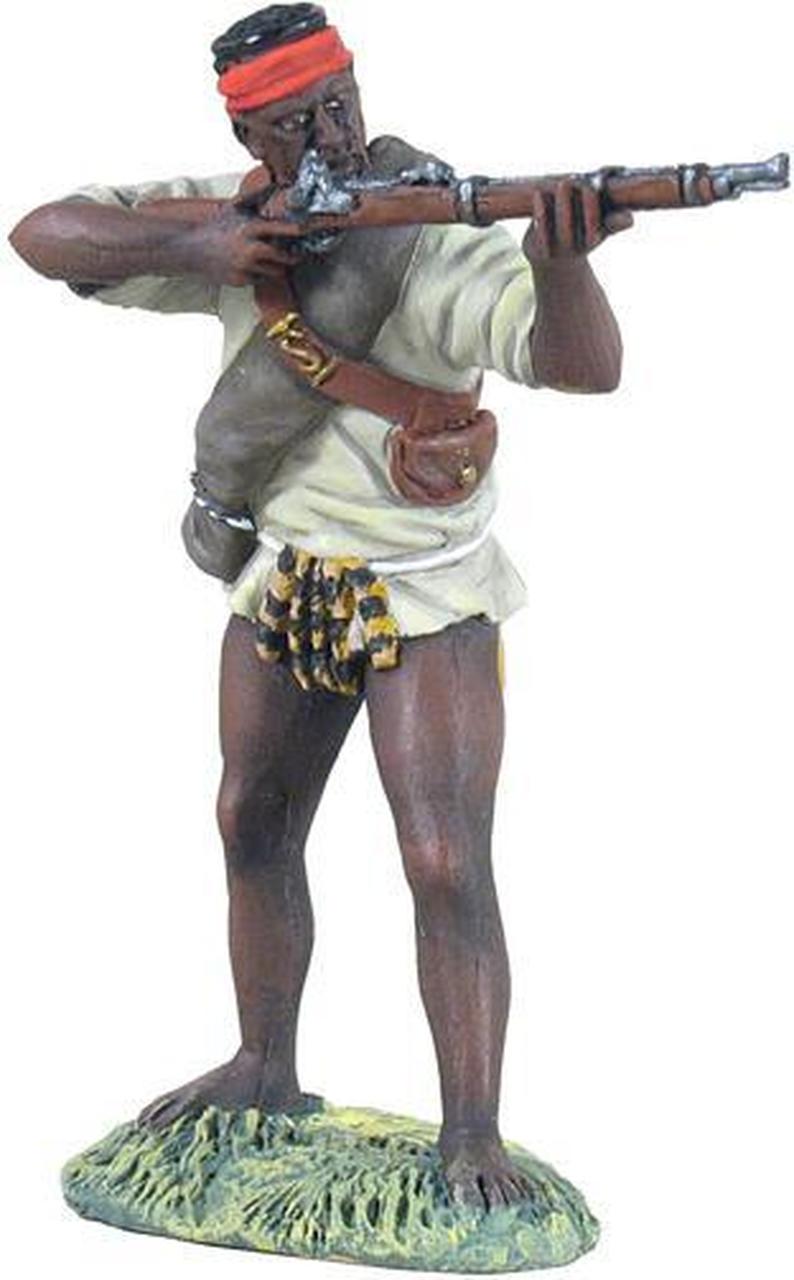