Giuseppe Garibaldi, considered one of Italy's so-called "fathers of the fatherland," has been called one of the greatest generals of modern times. Have you heard of him? Were you aware of the fact that his stamp on history extends far beyond Italy, or even Europe? Were you aware of his relationship to US history and Abraham Lincoln?More on that in another post... 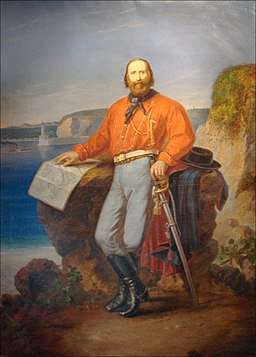 He was dubbed the "Hero of Two Worlds," due to his military exploits in Brazil and Uruguay, as well as in Europe. This great military commander was born in 1807 in Nice, France. His parents, Giovanni Domenico Garibaldi of Chiavari, Genoa and Maria Rosa Nicoletta Raimondo of Loano, Savona, both provinces of Italy. Nice had been annexed from Italy by France, only two years earlier, in 1805. Garibaldi's parents christened him Joseph-Marie Garibaldi. Giuseppe is an Italian form of Joseph. He was also called Jousé or Josep in the Niçard dialect, and Gioxeppe Gaibado in the Ligurian dialect of his father. As the son of coastal traders, he eventually went to sea, himself, and was certified as a merchant navy captain in 1832.

In 1833, Garibaldi met the leader of the Young Italy movement, Giuseppe Mazzini. Due to his participation in the insurrection at Piedmont with Mazzini, who wanted the unification of Italy, he was sentenced to death in absentia by a Genoese court. Because of that, he escaped to Marseille, France, and thus began his long and heroic military career.

Garibaldi's military service included allegiance to the Colorados in Uruguay, the Unitarians of Argentina, the Riograndese Republic, an attempted breakaway from Brazil, France (twice), the United Kingdom, the Roman Republic, the Kingdom of Sardinia, the Kingdom of Italy, and the United Provinces of Central Italy.

It was during his time in the Ragamuffin War, as it was called, when the Riograndese Republic attempted to break away from Brazil, that he met his future Brazilian wife, Ana Ribeiro da Silva, aka Anita. She joined him on his ship, the Rio Pardo, and fought by his side at the battles of Laguna and Imbituba, where they were able to successfully repel the better armed Imperial forces.

Garibaldi eventually married Anita in 1842. The couple had four children, before the pregant Anita tragically died of malaria in her husband's arms in 1849. There is a statue of the couple in Porto Alegre, Brazil, ever immortalizing the romance of this skilled military couple. Giuseppe fought many battles, both in Europe and in Uruguay and Brazil, gaining him a reputation as one of the greatest generals of modern times, and hero status, both in Europe and in South America.

Many of the campaigns Garibaldi commanded and fought in were a major factor in the eventual unification of Italy. For a short time, from 1850 to 1853, he spent time in the United States. The cottage where he stayed on Staten Island, while working for the inventor, Antonio Meucci, has been preserved as the Garibaldi Memorial.

So successful and heroic was Garibaldi in his military exploits, both in Europe and in South America, that he became somewhat of a cult hero in the United States. Indeed, perhaps partly because of his strong endorsement of the Union cause, and partly because of his fame, on September 8th, 1861, President Lincoln asked General Garibaldi to lead the Union Army. He refused, because at the time, Lincoln would not promise to free American slaves. Instead, that commission eventually went to General Ulysses S. Grant.