This week in historical and product spotlights, we’re featuring pirates!

Piracy is an act of robbery or criminal violence by ship or boat-borne attackers upon another ship or a coastal area, typically with the goal of stealing cargo and other valuable items or properties. The earliest documented instances of piracy were in the 14th century BC, when the Sea Peoples, a group of ocean raiders, attacked the ships of the Aegean and Mediterranean civilizations. It may be reasonable to assume that piracy has existed for as long as the oceans were plied for commerce. Narrow channels which funnel shipping into predictable routes, have long created opportunities for piracy, as well as for privateering and commerce raiding. Historic examples include the waters of Gibraltar, the Strait of Malacca, Madagascar, the Gulf of Aden, and the English Channel, whose geographic structures facilitated pirate attacks. 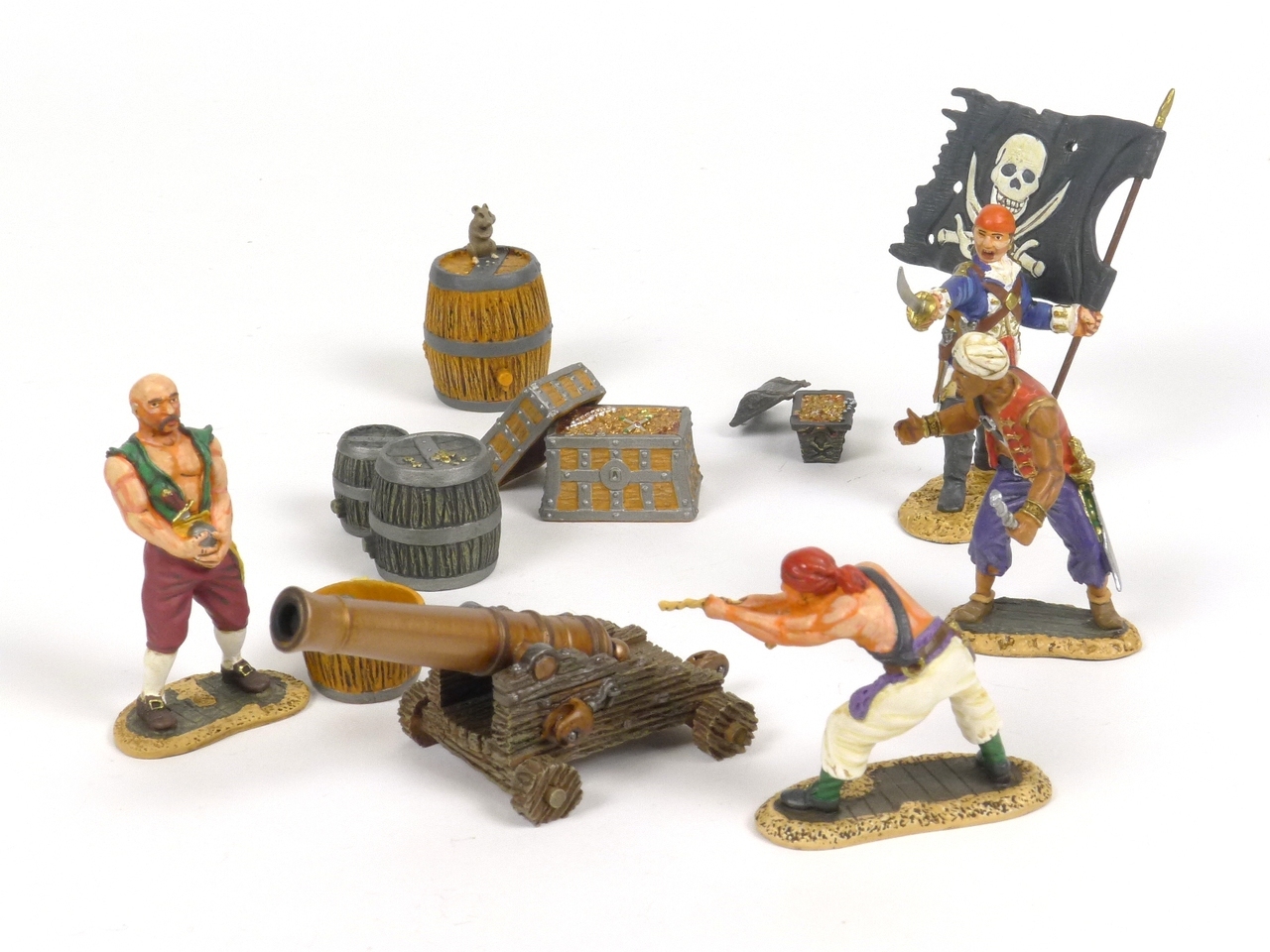 In the early 21st century, seaborne piracy against transport vessels remains a significant issue (with estimated worldwide losses of US$16 billion per year in 2004), particularly in the waters between the Red Sea and Indian Ocean, off the Somali coast, and also in the Strait of Malacca and Singapore. Today, pirates armed with automatic weapons such as assault rifles, machine guns, grenades, and rocket propelled grenades use small motorboats to attack and board ships, a tactic that takes advantage of the small number of crew members on modern cargo vessels and transport ships. They also use larger vessels, known as "mother ships", to supply the smaller motorboats. The international community is facing many challenges in bringing modern pirates to justice, as these attacks often occur in international waters. Some nations have used their naval forces to protect private ships from pirate attacks and to pursue pirates, and some private vessels use armed security guards, high-pressure water cannons, or sound cannons to repel boarders, and use radar to avoid potential threats.

Pirates had a system of hierarchy on board their ships determining how captured money was distributed. However, pirates were fairly egalitarian. In the golden age of piracy, pirate quartermasters were a counterbalance to the captain and had the power to veto his orders. The majority of plunder was in the form of cargo and ship's equipment, with medicines the most highly prized. A vessel's doctor's chest would be worth anywhere from £300 to £400, or around $470,000 in today's values. Jewels were common plunder but not popular, as they were hard to sell, and pirates, unlike the public of today, had little concept of their value. There is one case recorded where a pirate was given a large diamond worth a great deal more than the value of the handful of small diamonds given to his crewmates as a share. He felt cheated and had it broken up to match what they received.

Spanish pieces of eight minted in Mexico or Seville were the standard trade currency in the American colonies. However, every colony still used the monetary units of pounds, shillings, and pence for bookkeeping while Spanish, German, French, and Portuguese money were all standard mediums of exchange as British law prohibited the export of British silver coinage. Until the exchange rates were standardized in the late 18th century, each colony legislated its own different exchange rates. In England, 1 piece of eight was worth 4s 3d while it was worth 8s in New York, 7s 6d in Pennsylvania and 6s 8d in Virginia. One 18th-century English shilling was worth around $58 in modern currency, so a piece of eight could be worth anywhere from $246 to $465. As such, the value of pirate plunder could vary considerably, depending on who recorded it and where.

Ordinary seamen received a part of the plunder at the captain's discretion but usually a single share. On average, a pirate could expect the equivalent of a year's wages as his share from each ship captured while the crew of the most successful pirates would often each receive a share valued at around £1,000 ($1.17 million) at least once in their career. One of the larger amounts taken from a single ship was that by captain Thomas Tew from an Indian merchantman in 1692. Each ordinary seaman on his ship received a share worth £3,000 ($3.5 million), with officers receiving proportionally larger amounts as per the agreed shares, with Tew himself receiving two and a half shares. There were actions with multiple ships captured where a single share was worth almost double this.

Even though pirates raided many ships, few, if any, buried their treasure. Often, the "treasure" that was stolen was food, water, alcohol, weapons, or clothing. Other things they stole were household items like bits of soap and gear like rope and anchors, or sometimes they would keep the ship they captured (either to sell off or keep because it was better than their ship). Such items were likely to be needed immediately, rather than saved for future trade. For this reason, there was no need for the pirates to bury these goods. Pirates tended to kill few people aboard the ships they captured; usually they would kill no one if the ship surrendered, because if it became known that pirates took no prisoners, their victims would fight to the last breath and make victory both very difficult and costly in lives. In contrast, ships would quickly surrender if they knew they would be spared. In one well-documented case, 300 heavily armed soldiers on a ship attacked by Thomas Tew surrendered after a brief battle with none of Tew's 40-man crew being injured.

During the 17th and 18th centuries, once pirates were caught, justice was meted out in a summary fashion, and many ended their lives by "dancing the hempen jig", a euphemism for hanging. Public execution was a form of entertainment at the time, and people came out to watch them as they would to a sporting event today. Newspapers reported details such as condemned men's last words, the prayers said by the priests, and descriptions of their final moments in the gallows. In England most of these executions took place at Execution Dock on the River Thames in London.

In the cases of more famous prisoners, usually captains, their punishments extended beyond death. Their bodies were enclosed in iron cages (gibbet) (for which they were measured before their execution) and left to swing in the air until the flesh rotted off them- a process that could take as long as two years. The bodies of captains such as William "Captain" Kidd, Charles Vane, William Fly, and Jack Rackham ("Calico Jack") were all treated this way.

The Pirate Code, as recorded by Captain Charles Johnson regarding the articles of Bartholomew Roberts, follows:

1.Every man shall have an equal vote in affairs of moment. He shall have an equal title to the fresh provisions or strong liquors at any time seized, and shall use them at pleasure unless a scarcity may make it necessary for the common good that a retrenchment may be voted.

2.Every man shall be called fairly in turn by the list on board of prizes, because over and above their proper share, they are allowed a shift of clothes. But if they defraud the company to the value of even one dollar in plate, jewels or money, they shall be marooned. If any man rob another he shall have his nose and ears slit, and be put ashore where he shall be sure to encounter hardships.

3.None shall game for money either with dice or cards.

4.The lights and candles should be put out at eight at night, and if any of the crew desire to drink after that hour they shall sit upon the open deck without lights.

5.Each man shall keep his piece, cutlass and pistols at all times clean and ready for action.

6.No boy or woman to be allowed amongst them. If any man shall be found seducing any of the latter sex and carrying her to sea in disguise he shall suffer death.

7.He that shall desert the ship or his quarters in time of battle shall be punished by death or marooning.

8.None shall strike another on board the ship, but every man's quarrel shall be ended on shore by sword or pistol in this manner. At the word of command from the quartermaster, each man being previously placed back to back, shall turn and fire immediately. If any man do not, the quartermaster shall knock the piece out of his hand. If both miss their aim they shall take to their cutlasses, and he that draw the first blood shall be declared the victor.

9.No man shall talk of breaking up their way of living till each has a share of 1,000. Every man who shall become a cripple or lose a limb in the service shall have 800 pieces of eight from the common stock and for lesser hurts proportionately.

10.The captain and the quartermaster shall each receive two shares of a prize, the master gunner and boatswain, one and one half shares, all other officers one and one quarter, and private gentlemen of fortune one share each.

11.The musicians shall have rest on the Sabbath Day only by right. On all other days by favor only.

To date, the following pirate shipwrecks have been discovered: