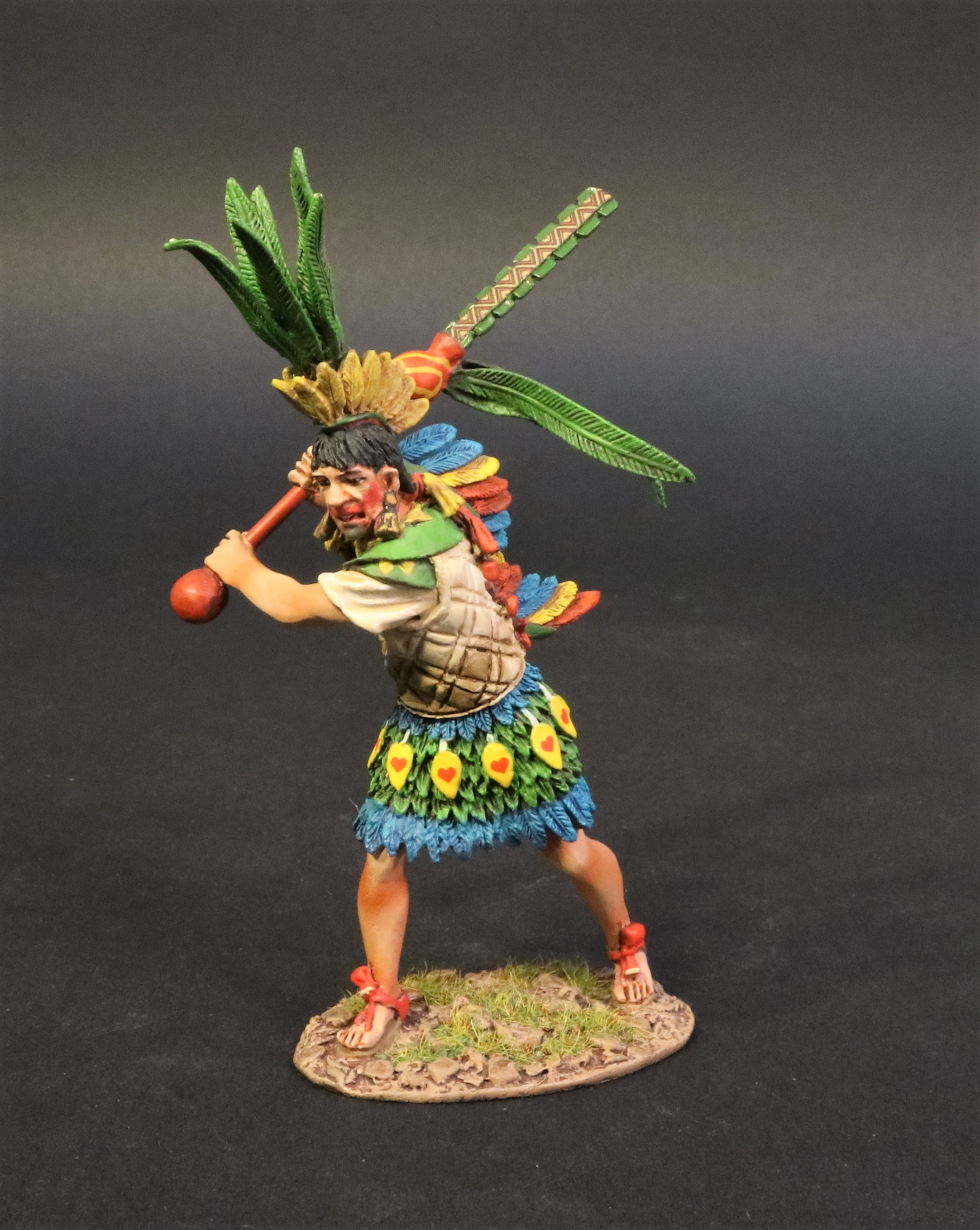 Image: Aztec Ally Chieftain with Cuauhololli (The Conquest of America, The Aztec Empire), available from Trains and Toy Soldiers.

The Aztec Empire, or the Triple Alliance, was an alliance of three Nahua altepetl city-states: Mexico-Tenochtitlan, Texcoco, and Tlacopan. These three city-states ruled the area in and around the Valley of Mexico from 1428 until the combined forces of the Spanish conquistadores and their native allies under Hernán Cortés slaughtered them in 1521.

The Triple Alliance was formed from the victorious factions of a civil war fought between the city of Azcapotzalco and its former tributary provinces. Despite the initial conception of the empire as an alliance of three self-governed city-states, Tenochtitlan quickly became dominant militarily. By the time the Spanish arrived in 1519, the lands of the Alliance were effectively ruled from Tenochtitlan, while the other partners in the alliance had taken subsidiary roles.

The alliance waged wars of conquest and expanded rapidly after its formation. At its height, the alliance controlled most of central Mexico as well as some more distant territories within Mesoamerica, such as the Xoconochco province, an Aztec enclave near the present-day Guatemalan border. Aztec rule has been described by scholars as hegemonic or indirect - the Aztecs left rulers of conquered cities in power so long as they agreed to pay semi-annual tribute to the Alliance, as well as supply military forces when needed for the Aztec war efforts. In return, the imperial authority offered protection and political stability, and facilitated an integrated economic network of diverse lands and peoples who had significant local autonomy.

The state religion of the empire was polytheistic, worshiping a diverse pantheon that included dozens of deities. The imperial cult was that of Huitzilopochtli, the distinctive warlike patron god of the Mexica. Peoples in conquered provinces were allowed to retain and freely continue their own religious traditions, so long as they added Huitzilopochtli to their local pantheons.

The Aztec Empire flourished between c. 1345 and 1521 and, at its greatest extent, covered most of northern Mesoamerica. Aztec warriors were able to dominate their neighboring states and permit rulers such as Motecuhzoma II to impose Aztec ideals and religion across Mexico. Highly accomplished in agriculture and trade, the last of the great Mesoamerican civilizations was also noted for its art and architecture.

The empire continued to expand from 1430, and the Aztec military - bolstered by conscription of all adult males, men supplied from allied and conquered states, and such elite groups as the Eagle and Jaguar warriors - swept aside their rivals. Aztec warriors wore padded cotton armor, carried a wooden or reed shield covered in hide, and wielded weapons such as a super sharp obsidian sword-club (macuahuitl), a spear or dart thrower (atlatl), and bow and arrows. Elite warriors also wore spectacular feathered and animal skin costumes and headdresses to signify their rank. Battles were concentrated in or around major cities, and when these fell, the victors claimed the whole surrounding territory. Regular tributes were extracted, and captives were taken back to Tenochtitlan for ritual sacrifice. In this way the Aztec empire came to cover most of northern Mexico, an area of some 135,000 square kilometers.

Image: Hastatus (Armies and Enemies of Ancient Rome, The Roman Army of the Mid Republic), available from Trains and Toy Soldiers.

The Roman Republic was the era of classical Roman civilization beginning with the overthrow of the Roman Kingdom, traditionally dated to 509 BC, and ending in 27 BC with the establishment of the Roman Empire. It was during this period that Rome's control expanded from the city's immediate surroundings to hegemony over the entire Mediterranean world.

Roman government was headed by two consuls, elected annually by the citizens and advised by a senate composed of appointed magistrates. As Roman society was very hierarchical by modern standards, the evolution of the Roman government was heavily influenced by the struggle between the patricians, Rome's land-holding aristocracy, who traced their ancestry to the founding of Rome, and the plebeians, the far more numerous citizen-commoners. Over time, the laws that gave patricians exclusive rights to Rome's highest offices were repealed or weakened, and leading plebeian families became full members of the aristocracy. The leaders of the Republic developed a strong tradition and morality requiring public service and patronage in peace and war, making military and political success inextricably linked. Many of Rome's legal and legislative structures can still be observed throughout Europe and much of the world in modern nation states and international organizations.

During the first two centuries of its existence, the Roman Republic expanded through a combination of conquest and alliance, from central Italy to the entire Italian peninsula. By the following century, it included North Africa, most of the Iberian Peninsula, and what is now southern France. Two centuries after that, towards the end of the 1st century BC, it included the rest of modern France, Greece, and much of the eastern Mediterranean. By this time, internal tensions led to a series of civil wars, culminating with the assassination of Julius Caesar, which led to the transition from republic to empire.

As the defining event ending the Republic, historians have variously proposed Julius Caesar's crossing of the Rubicon River in 49 BC, Caesar's appointment as dictator for life in 44 BC, and the defeat of Mark Antony and Cleopatra at the Battle of Actium in 31 BC. However, most use the same date as did the ancient Romans themselves, the Roman Senate's grant of extraordinary powers to Octavian and his adopting the title Augustus in 27 BC.

Image: Hastati (Armies and Enemies of Ancient Rome, The Roman Army of the Mid Republic), available from Trains and Toy Soldiers.

The Roman army of the mid-Republic (also known as the manipular Roman army or the "Polybian army"), refers to the armed forces deployed by the mid-Roman Republic, from the end of the Samnite Wars (290 BC) to the end of the Social War (88 BC). The first phase of this army, in its manipular structure (290–ca. 130 BC), is described in detail in the Histories of the ancient Greek historian Polybius, writing before 146 BC.

The central feature of the mid-Republican army was the manipular organization of its battle-line. Instead of a single, large mass (the phalanx) as in the Greek and Early Roman army, the Romans now drew up in three lines (triplex acies) consisting of small units (maniples) of 120 men, arrayed in chessboard fashion, giving much greater tactical strength and flexibility.

The Republican army of this period, like its earlier forebear, did not maintain standing or professional military forces, but levied them, by compulsory conscription, as required for each campaigning season and disbanded thereafter (although formations could be kept in being over winter during major wars). Service in the legions was limited to property-owning Roman citizens, normally those known as iuniores (age 16-46).

For the vast majority of the period of its existence, the Polybian levy was at war. This led to great strains on Roman and Italian manpower, but forged a superb fighting machine. During the Second Punic War, fully two-thirds of Roman iuniores were under arms continuously. In the period after the defeat of Carthage in 201 BC, the army was campaigning exclusively outside Italy, resulting in its men being away from their home plots of land for many years at a stretch. They were assuaged by the large amounts of booty that they shared after victories in the rich eastern theatre. But in Italy, the ever-increasing concentration of public lands in the hands of big landowners, and the consequent displacement of the soldiers' families, led to great unrest and demands for land redistribution. This was successfully achieved, but resulted in the disaffection of Rome's Italian allies, who as non-citizens were excluded from the redistribution. This led to the mass revolt of the socii and the Social War (91-88 BC). The result was the grant of Roman citizenship to all Italians and the end of the Polybian army's dual structure: the alae were abolished and the socii recruited into the legions. The Roman army of the late Republic (88–30 BC) resulted, a transitional phase to the Imperial Roman army (30 BC – AD 284).

Hastati were a class of infantry employed in the armies of the early and Mid Roman Republic. They were originally some of the poorest men in the legion, and could afford only modest equipment. Later, the hastati contained the younger men rather than just the poorer. Their usual position was the first battle line. The hastati were formed into 10 maniples of 120 men each, therefore 1,200 men per legion. In battles, the velites would gather at the front and fling javelins to cover the advance of the hastati. If the hastati failed to break the enemy, they would fall back on the principes. If the principes could not break the enemy, they would retire behind the triarii, who would then engage.

We're thrilled to have so many exciting toy soldiers from ancient empires with rich histories. Check out our website or give us a call for more information on our new John Jenkins Designs products!