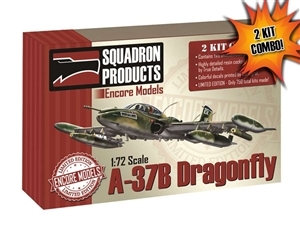 The Cessna A-37 Dragonfly remains one of the most virsitle planes ever produced and has been the Air Forces' Primary trainer for 50 years, even though only 577 were built.

The Super Tweet, is a light attack aircraft that was developed from the T-37 basic trainer in the 1960s and 1970s by Cessna of Wichita, Kansas. It became a workhorse for the Air Force during the vietnam war.

In 1963 modificated were made to the plane that included.

In August 1967, 25 A-37As arrived in Vietnam under the code name "Combat Dragon" for an evaluation program. They were stationed at Bien Hoa Air Base, and flew "air commando" missions, which involved close air support, escort, FAC, and night interdiction.

The plane was very reliable and could go longer periods without maintenance. During combat the plane flew low, and slow, it also did not present a good target for the enemy, thus not many were shot down.

In the first 3,000 sorties not one A-37 Dragon was shot down. Crew chiefs loved the plane and and its easy maintenance. They could also be turned around for the next mission in 90 minutes.

One Pilot Major Richard Martel who had requested not to be assigned to mission where he would have to take life, described a mission that took place on November 29, 1967

“He found himself far from his first-choice assignment, piloting one of two heavily armed A-37s circling atop a stack of Super Sabres at midnight. On the ground 16,000 feet below, in a place called Bu Dop, a special forces air base was under siege by Viet Cong hunkered down in thick jungle. The F-100s rolled in, bombing and strafing, then left the area. Despite the pounding, an anxious forward air controller alerted Martel to a multitude of Viet Cong massing for a final assault. Only the two A-37s remained above the target, both carrying 250- and 500-pound bombs plus six tubes of CBUs—anti-personnel cluster bomb units. Martel radioed the other Dragonfly pilot to extinguish his navigation lights and rotating beacon, then flipped his CBU switches to "HOT."

"We're gliding down from altitude completely dark with our throttles pulled all the way back to idle," he recalled. "It's pitch black. The VC think everybody's gone home. They can't see us. They can't even hear us. I dove the last 6,000 to the deck and leveled out at 100 feet. But that's nothing in an A-37."

Tracers from Russian-made 12.7-mm guns swarmed him as he methodically dispersed cluster bombs from rock-throwing altitude. He laid them in a swath 300 meters long. Flying a racetrack pattern, his wingman followed, also strewing the bomb units.

The ambivalent combatant, whose one request was duty in a non-lethal aircraft, paused for an instant four decades later. "We killed them all," he continued quietly. "We killed over 200 of them on one run." Both A-37s climbed away, then returned to take out gun emplacements with hard bombs. "The base was saved."

Even though the A-37 had flown over 160,000 combat sorties there were only 22 USAF losses. After the Vietnam was over the remaining planes were used by the Air National Guard and Air Force Reserve. The $400,000 Dragonfly gave up its role to the $8 million (in 1980 dollars) Warthog.

These two notable pilots of the A-37 gained fame and went on to great things. Lieutenant General John Bradley, with half of his 7,000 hours in A-37s, became chief of the Air Force Reserve. Astronaut John Blaha rose from A-37s to command space shuttles, and become a veteran of six Space Shuttle missions and a stay on the Mir space station.

Trains and Toy Soldiers now has the highly reviewed 2 Kit Combo 1/72 scale A-37B Dragonfly by Encore in stock. Don’t miss to your chance to own this limited mid twiethith century war machine model. Available for a limited time and for only $19.99 nearly $30 off the the everyday retail price.