Near the end of World War II, Nazi Germany was up against the wall. The German engineers were pulling out all the stops to help with the war effort. The Heinkel HE 162 Luftwaffe interceptor jet fighter, was one of the planes with which they tried to regain air superiority. American’s bombing had overwhelmed the German Luftwaffe's ability to defend against the bombers. Something had to be done and quick. The HE 162 was built by the The Emergency Fighter Program (German: Jägernotprogramm, literally "Fighter Emergency Program"). It was cheap and one of the first single jet engine planes. It also was one of the first planes to have an ejection seat. It only took 3 months from drawing board to prototype. The Heinkel was fitted with 20mm guns, later versions were armed with 30mm guns. The BMW 003 axial-flow turbojet was mounted in a pod nacelle located atop the fuselage directly behind the cockpit. The Germany economy had little resources so they needed to build the Heinkel out of wood, using unskilled labor. 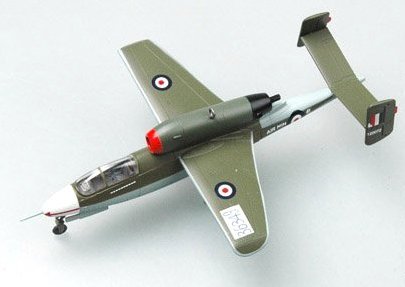 Some of the requirements were:

Volksjäger was the Reichs Air Ministry's official name for the design program competition won by the He 162 design. Among the other names given to the plane include Salamander, which was the codename of its construction program, and Spatz ("Sparrow"), which was the name given to the plane by Heinkel. It was planned that it would be the People's fighter and that the Hitler youth would pilot the Jet. Germany was short pilots so it would most likely be a death trap for those who took to the skies.

Because of the extreme shortage of qualified pilots, only two fighter units, I./JG 1 and II./JG 1 managed to convert to the Heinkel HE 162 before the end of the war.

Only two unconfirmed victories were claimed by Heinkel HE 162 pilots. One of these was a victory by Lt. Rudolf Schmitt flying a He 162 "White 1" against a Typhoon or Tempest above Rostock. On 19 April, a captured Royal Air Force fighter pilot informed his German interrogators that he had been shot down by a jet fighter matching the description of the HE 162. The Heinkel and its pilot were lost as well, shot down by an RAF while on landing.

Royal Navy pilot Captain Eric Brown said the He-162 was a very unforgiving airplane, but a very stable gun platform. He reported that the view from the cockpit was excellent, except for the six o’clock position, which was blocked by the Jet engine. Brown said, had the Luftwaffe enough time to fully develop the He 162 with well-trained pilots, the world's first operational single-engine jet fighter would have been a worthy opponent.

Trains and Toy Soldier has just a few HE 162 military miniatures left in stock. This historical significant plane had a large and loyal group of admires decades later, so make sure to act soon before we are sold out.