Now’s the time to live the dream you’ve always had – collecting trains and toy soldiers. To help you make those dreams a reality, we’re giving you 15% off the ENTIRE STORE, now through Sunday, May 24. Use the code DREAM2020 at checkout to apply your discount!

It’s still important to stay home if your work and health allow, and instead of focusing on productivity or the anxiety of the current moment, turn your attention to reigniting old passions and hobbies. In the time of global pandemic, it’s more important than ever to be gentle with yourself and with others. Have you always dreamed of making a diorama about your favorite historical events? Have you been hoping to make the foray into a new scale of train model? Do you want to turn your living room or backyard into a dynamic garden railroad? We’ll help you make it happen! Now is the time to cultivate those hopes and dreams. 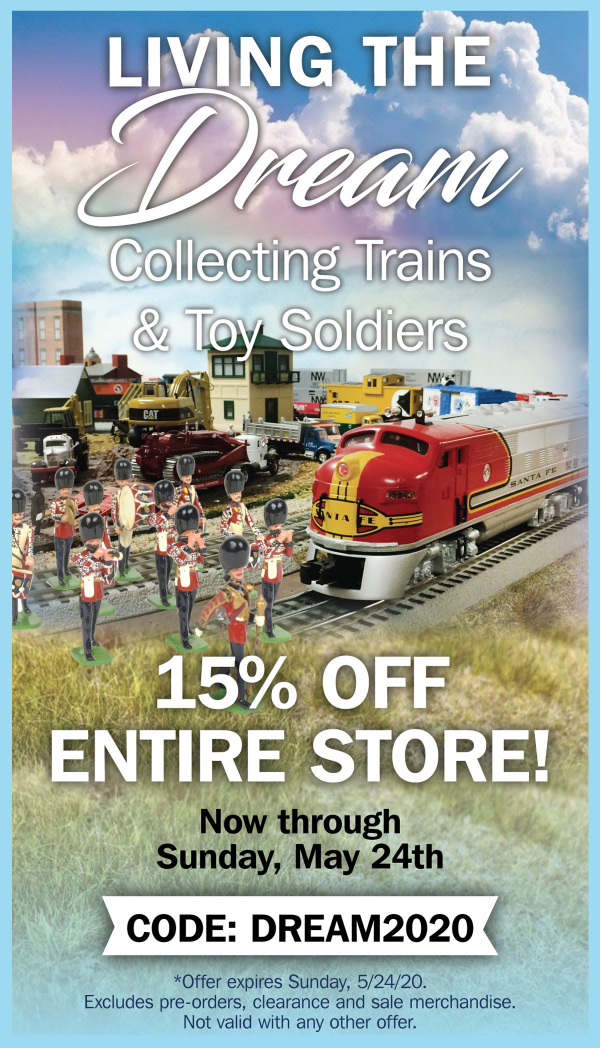 Dreams are one of the great mysteries of the human experience. Did you know:

Although we may not know exactly why we dream, or whether the function of our dreams is more physiological or psychological, it is clear that the dreams we have for ourselves (at least the ones we have while we’re awake!) can have a profound impact on our lives and our happiness. Trains and Toy Soldiers wants to help you achieve your dreams about pursuing your hobbies and passions - give us a call today and we’ll help you figure out where to begin or pick up your hobby again. We’ve got thousands of collectibles, from vehicles to train sets to hand-painted figurines to stunning backdrops, and we’re eager to help you ignite your joy. Live your dream, and don’t forget to use the code DREAM2020 to take 15% off the entire store.