Trains and Toy Soldiers is offering free shipping this Memorial Weekend with the code FREEDOM2020. 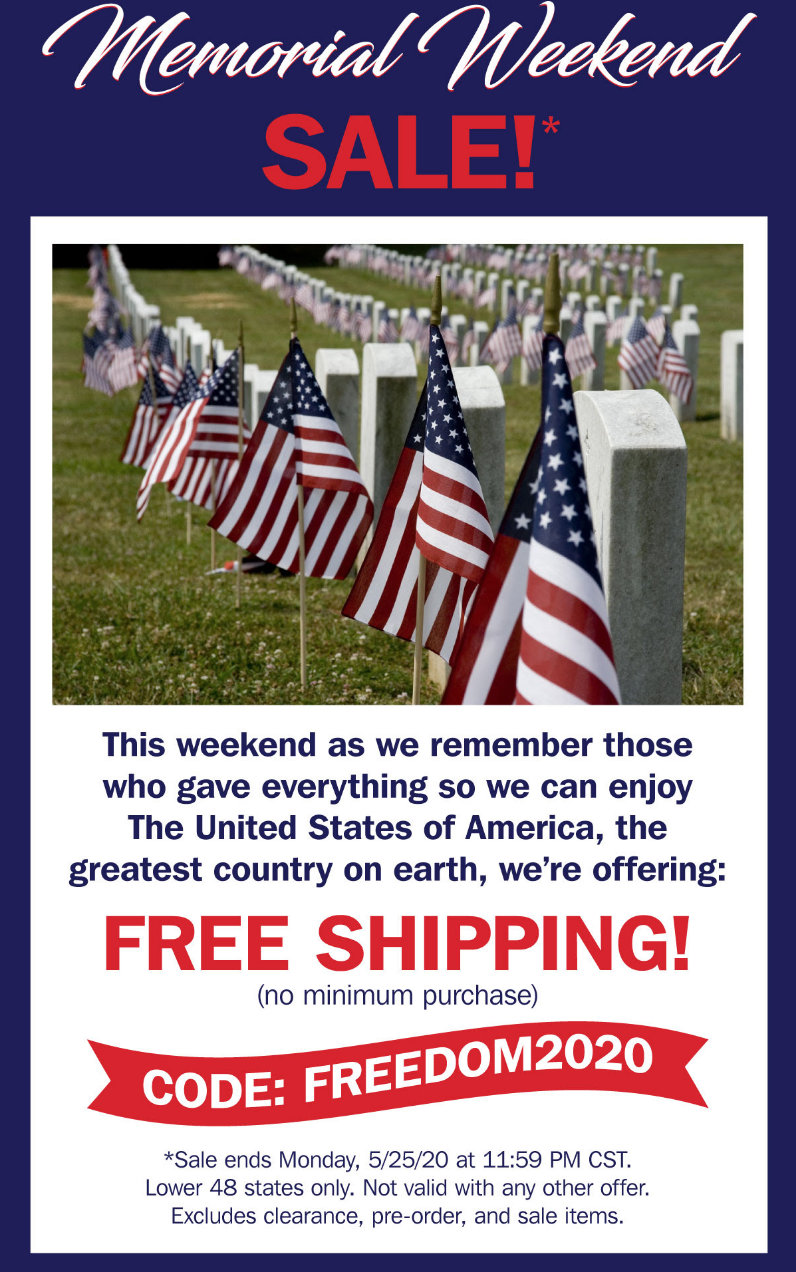 People have been honoring those lost in battle for centuries. What we have come to know as Memorial Day has more recent origins. One of the earliest commemorations of Memorial Day was organized by recently freed slaves after the Civil War. “As the Civil War neared its end, thousands of Union soldiers, held as prisoners of war, were herded into a series of hastily assembled camps in Charleston, South Carolina. Conditions at one camp, a former racetrack near the city’s Citadel, were so bad that more than 250 prisoners died from disease or exposure, and were buried in a mass grave behind the track’s grandstand. Three weeks after the Confederate surrender, an unusual procession entered the former camp: On May 1, 1865, more than 1,000 recently freed slaves, accompanied by regiments of the U.S. Colored Troops (including the Massachusetts 54th Infantry) and a handful of white Charlestonians, gathered in the camp to consecrate a new, proper burial site for the Union dead. The group sang hymns, gave readings and distributed flowers around the cemetery, which they dedicated to the ‘Martyrs of the Race Course.’

“In May 1868, General John A. Logan, the commander-in-chief of the Union veterans’ group known as the Grand Army of the Republic, issued a decree that May 30 should become a nationwide day of commemoration for the more than 620,000 soldiers killed in the recently ended Civil War. On Decoration Day, as Logan dubbed it, Americans should lay flowers and decorate the graves of the war dead ‘whose bodies now lie in almost every city, village and hamlet churchyard in the land.’

“According to legend, Logan chose May 30 because it was a rare day that didn’t fall on the anniversary of a Civil War battle, though some historians believe the date was selected to ensure that flowers across the country would be in full bloom.

“After the war Logan, who had served as a U.S. congressman before resigning to rejoin the army, returned to his political career, eventually serving in both the House and Senate and was the unsuccessful Republican candidate for vice president in 1884. When he died two years later, Logan’s body laid in state in the rotunda of the United States Capitol, making him one of just 33 people to have received the honor. Today, Washington, D.C.’s Logan Circle and several townships across the country are named in honor of this champion of veterans and those killed in battle” (History.com).

This holiday has changed over the years. It was known as “Decoration Day” for over a century, and Memorial Day only became a federal holiday in 1971 while the U.S. was embroiled in the Vietnam War. Memorial Day was traditionally observed on May 30 (regardless of the day of the week), but the Uniform Monday Holiday Act of 1968 changed the holiday to be the last Monday in May, as it remains to this day. In 2000, the U.S. passed legislation and encouraged all Americans to pause for a moment of remembrance at 3pm on Memorial Day.

58,220 Americans died in the Vietnam War. And now, within a three month span of 2020, nearly 100,000 people in the United States have died from the coronavirus. These are incalculable losses. The New York Times has been collecting memories about those who have been lost here:

“They were not simply names on a list. They were us.” 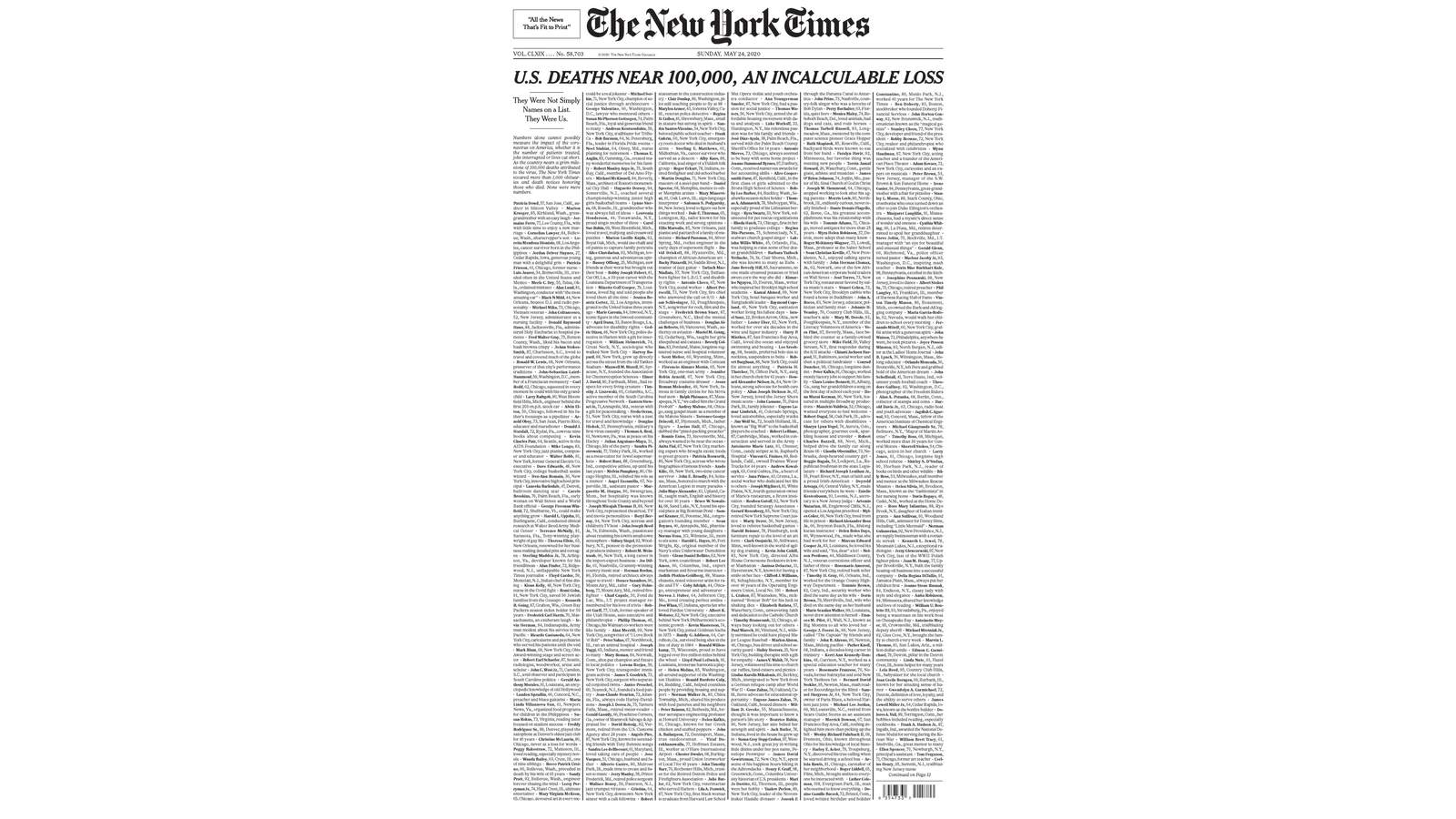 As we memorialize those we have lost, in battles past and present, we should also consider who is subject to the most harm. “Most state data so far shows significant racial disparities in deaths from COVID-19 across the country, with black Americans overrepresented and whites underrepresented relative to their share of the overall population” (Zenteno). Reopening non-essential businesses places the heaviest burden on poor Americans and people of color. Dr. Wayne A.I. Frederick, a cancer surgeon and the president of Howard University, says some of this disparity may stem from the fact that “African-Americans are essential employees in our system […] Everything from bus drivers to health care workers and cleaning services, they are on the front line, and therefore are far more likely to be exposed.’ Nationally, statistics show, black people have been infected with the coronavirus, and are dying from it, at disproportional rates in some places” (Waldstein). The virus does not discriminate based on race or class or ability as it spreads, but the system in which we live certainly does discriminate – some lives are deemed more valuable than others, and those who are less privileged are exposed to the highest risk with the fewest resources.

Today, as we remember those who have been killed in battle and honor American veterans, let us also take a moment to honor those who have been killed in such great numbers across the globe as a result of the COVID-19 pandemic. One hundred thousand individuals, with full lives and dreams and people who loved them, have lost their lives because of the coronavirus in the U.S. alone. Please help keep this horrifying number from growing any more, staying home if you’re able; taking protective measures such as social distancing, mask use, and hand-washing when you must go out; and avoiding any large gatherings or meetings with people you have not been quarantining with.

Eight things you may not know about Memorial Day: