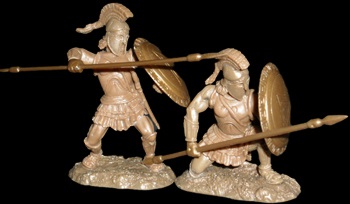 For thousands of years, the tactics and strategies developed and perfected by the Spartans would be the standard of western warfare and later the entire word. Through the example these warriors standing in a line protecting their brothers right side that this form of combat was defined and proven. The Spartans were the elite of the Greek method of war for nearly three hundred years. Just the appearance of the red Lambda emblazoned on their shields would cause some Greeks to quit the field. The Spartan boys were brought to the Agoge, a constant military training school. The school produced the ultimate in Hoplite soldiers. The Spartan was a true soldier. From head to toe they were ready for war. Full Spartiates trained as a unit and fought shoulder to shoulder. They were equipped with the latest in armament as shown in Conte Collectible set from around the 5th century B.C.

The Hoplon shield as depicted in these miniatures were a revolution in shields. The grip was a two-strap system that allowed the forearm to hold and support the shield. This allowed the shield to be covered in bronze and made from a much heavier wooden frame. Rather than the mostly wicker shields that the invading Persians were using. This new design offers maximum protection for your front but leaves open a gap on the right side. This is where the importance of having a brother in arms you can depend on standing to your right. His strength protects your weakly defended area. If the enemy was able to get past the shield the Spartan mid-section was protected by the bronze cuirasses depicted here in many different poses. This breastplate style heavy infantry protection was far better than anything else in its time. Then add in the leg greaves and the iconic Corthinian helmet and as you can see he is covered from head to leg greave in protective metal. The Greek soldier was the premiere soldier in the eastern Mediterranean and the Spartan was the best of the Greeks.

The main offensive weapon was the Dory spear which allowed them to reach their enemy from a distance both above and below. Shown here in many action poses this was the first choice to attack an enemy, but it was not their only choice. If the spear was lost or damaged the Greek soldier also carried a short sword called the xiphos which typically was 60 centimeters and made from iron. The Spartans carried a slightly shorter but very similar version of this sword. The Spartan equipment did evolve but it is depicted here at most what most observers consider its height.

The Spartan line was only as strong as its weakest members so it became all important to have no weak links. Lycurgus the Spartan is credited with transforming Sparta into a military society which encouraged three virtues; austerity, strength, and fitness. While allowing all male Spartans to be considered equal. The intense training would be considered cruel now and even in its own day was outside the norm, it none the less created an indomitable soldier.

Shop for Conte Collectible Spartans right here, make sure to preorder if your favorite set has sold out. By preordering you will be assured you will get the Conte Spartans as we soon as we receive our next shipment.