The origin of the cannon is shrouded in the mists of time. Over a thousand years ago, the people of China started experimenting with nitrates or saltpeter. Like many famous discoveries, getting the right mixture was more than likely an accident. A surprising number of world changing events are just stumbled upon through trial and error. The first mention of the mixture was sometime around the year 7th Century A.D.

Explosives were first used for fun and celebration. The fire, lights and noise fascinated anyone who saw it, as fireworks still do today. The first record of fireworks display date from the Song Dynasty in ancient China. Soon, this new technology was turned towards the art of warfare.

The fundamental invention of gunpowder and the cannon were made by 1300. The exact date will probably never be known because the records are incomplete and hard to locate. Logically we can deduce, the gunpowder came soon after saltpeter was discovered and it’s a process for its purification perfected. Mostly likely this new discover traveled along the caravan routes known as the silk road. Gunpower came to Europe by way of these travelers around AD 1225, and that cannons appeared in southern Europe just before AD 1300.

Like most brilliant inventions, the cannon is simple machine built upon countless hours and years of experiment to develop the underlying materials. While the explosives that create a cannons devastating effect were being developed 7th century, the metal working and especially metal casting technology to create a strong metal cylinder would take years to develop. A cannon is cylinder permanently closed at one end that would direct the destruction towards the enemy. Into the open end of cannon a charge of explosive was placed and then the cannonball. When the charge was ignited through the touch-hole, it exploded, or changed to highly compressed gas, very quickly, expelling the ball to hurl towards the opponent. Cannonballs could scare people and horses, they could knock down walls, and they could, with a skilled gunner, mow down the enemy.

The first type of the cannon to appear on the battle field was a hand cannon. This new weapon struck fear in the defenders. In the year 1260 at a place called Ain Jalut, the Egyptian Mamluks defeated the Mongols (the first such definitive defeat in the West). Although the records are not definitive, many people consider this battle the arrival of cannon near the Mediterranean Sea.

Once the cannon was added to war all bets were off. Sitting behind the walls of heavily fortified cities was not safe anymore. You could not expect your castle to be a safe haven from these monsters of fire. Many a great fortress that had stood for hundreds of years could now be breached in days.

The crown jewel of the world at that time was Constantinople; the walls were 15 feet thick and made of multiple layers. In 1453 troops lead by Mehmed breached the walls using Super-Sized Bombards, which tore holes in the massive walls. Despite the valiant defense of the Emperor's army, within days the Islamic armies had taken the city and renamed it Islamabad.

Cannons have played a significant part in every war throughout history from that time on. It has always been who can get the most firepower on a given spot at the right time. During the Crimean war, three hundred and seven cannons fired 150,000 rounds, with the Russians suffering 2,000 to 3,000 casualties daily.

The invention of the Cannon played a pivotal role in the demise of Knighthood. Men in armor on horseback were no match for the cannon and later the gun. With the mounted heavily armored knight no longer the key factor for success on the battlefield, the foot soldier began to rise in prominence once again. Since soldiers might now be killed in the thousands instead of the hundreds, you could not invest too much time and effort into each one. 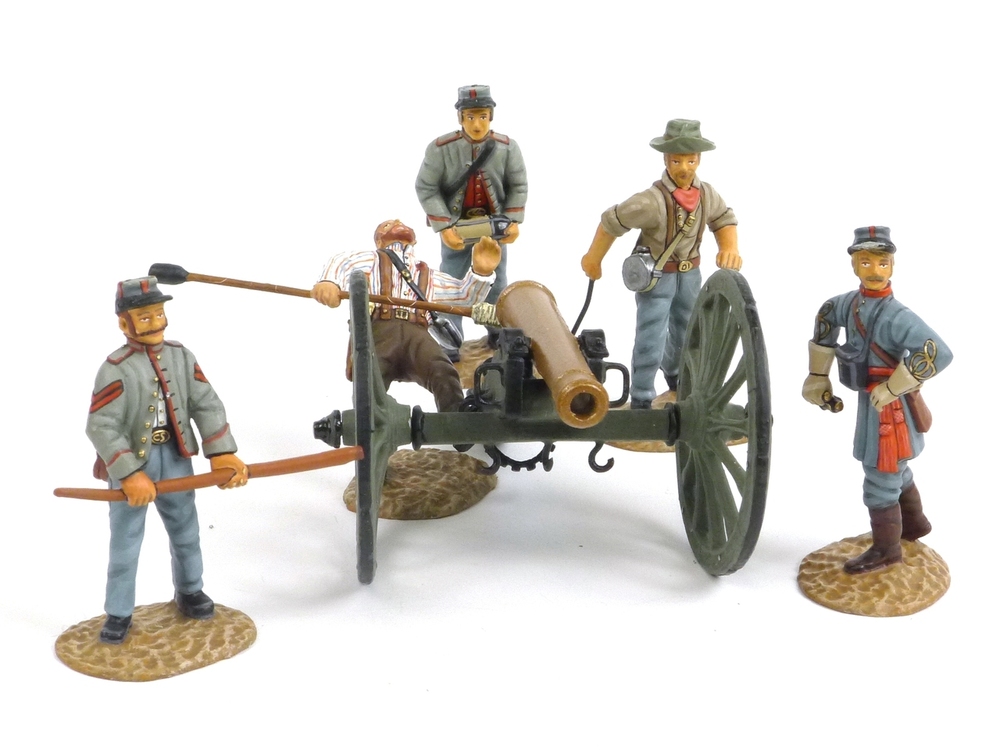 Since these men would fall in large numbers, it is not surprising that in 1814 a French wit named, François-René de Chateaubriand, coined the term “cannon fodder”. Though few people on the street could identify Mousier Chateaubriand, his turn of phrase is still in common usage over 200 years later.

Trains and Toy Soldiers has a large selection of military miniature cannons available. Some of the most sought after include the Frontline Figures A.C.G.1. American Civil War Confederate Artillery Firing Cannon and W Britain 31196 American Civil War Battle Damaged 12 pound Cannon. Of course, we have many, many more than that, if we can help you find a toy soldier cannon or any other military miniature please call us at 1-800-786-1888 or email us here.