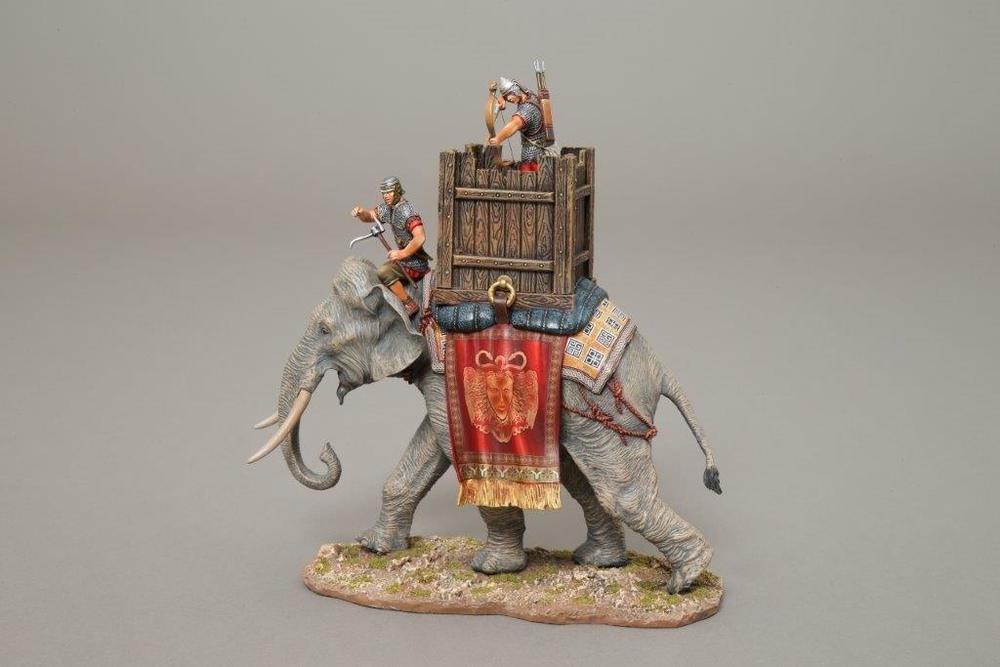 The Thomas Gunn Miniatures Roman War Elephant is one of the most exciting military miniatures to be released in years. Trains and Toy Soldiers is excited to be able to provide these Roman Empire Toy Soldier to you. The Roman War elephant evokes some of the most legendary battles of western civilization. The Roman Legions were the power behind one of the longest lasting empires in human history. The Roman War Machine strength adhered to discipline and tradition. The secret of the Roman Legions longevity was their depth and adaptability. While the Roman Legions were occasionally defeated, the Roman Republic and later the Roman Empire’s ability to muster new legions and deploy them quickly through their region meant that for hundreds of years the empire might lose a battle but would almost always win the war.

The ability to learn from their defeats and adapt was another strength of the Roman military. In 255 B.C.E., the Carthaginian military used war elephants effectively. The Carthaginians, led by Xanthippus, attacked the center of Roman lines with war elephants. The Romans fought bravely but survivors of the elephant attack could not withstand the follow-on attack by the Carthaginians infantry. More than eighty percent of the Roman Army that marched in battle that day would be killed or captured by sunset. One of the most devastating losses in the entire long saga of Rome. Rome did not buckle and fail even with losses of this magnitude, instead they developed new tactics to defeat war elephants’ charges in the future.

In the 2nd century B.C.E., the armies of Rome had added the war elephant to the their arsenal. In the battle of Cynoscephalae and Magnesia, Roman War elephants provided another powerful offensive tool for the already formidable Roman forces. By the time of Julius Caesar, knowledge of effective tactics against war elephants had become widespread and their use in battle became less common.

The legend of mighty war elephants echoes through the ages, few images of classic era warfare strike such a chord of primal fear as war elephant. Thomas Gunn Miniatures new Roman War Elephant is going to be one of the most sought after collectibles of 2017. You can preorder your war elephant right here.