Tradition of London produces traditional style toy soldiers, made in England. Tradition of London manufactures soldiers for collectors in 54mm size with a hand-painted gloss finish. 1960s quality and attention to detail has been the motto of this English manufacturer. Tradition is dedicated to producing quality, detailed and hand-painted figures. Not only are the toy soldier figures and artillery items outstanding, but so are the boxes in which they come, which are embossed in a distinctive red package. 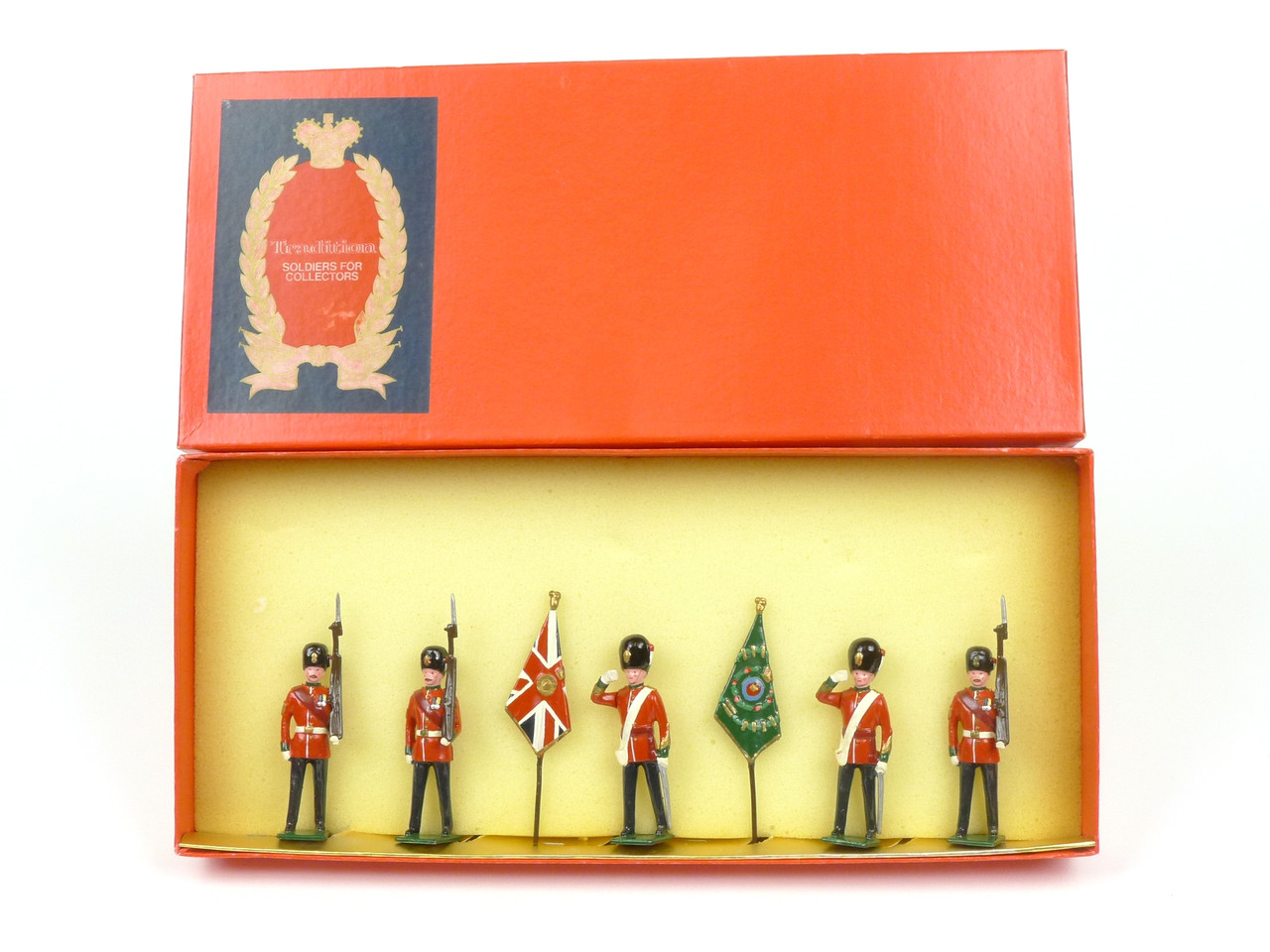 Image: Tradition of London Colours and Escort The Northumberland Fusiliers. Available at Trains and Toy Soldiers.

Pick up a Tradition of London toy soldier figure and look at the paint detail of the face; it’s amazing. The facial features, along with the painting of the eyes and lips, show the time, care and pride taken in producing quality toy soldiers. As I write this description, I’m holding in my hand a Prussian Infantry soldier in Parade Dress, and the detail is outstanding. The emblem on the black helmet, painted in gold, is highly distinguishable. The gold on the black plume, the gold buttons, red jacket and rank markings are impressive. With this high level of attention to detail, it is understandable why collectors support Tradition of London toy soldiers and figures. 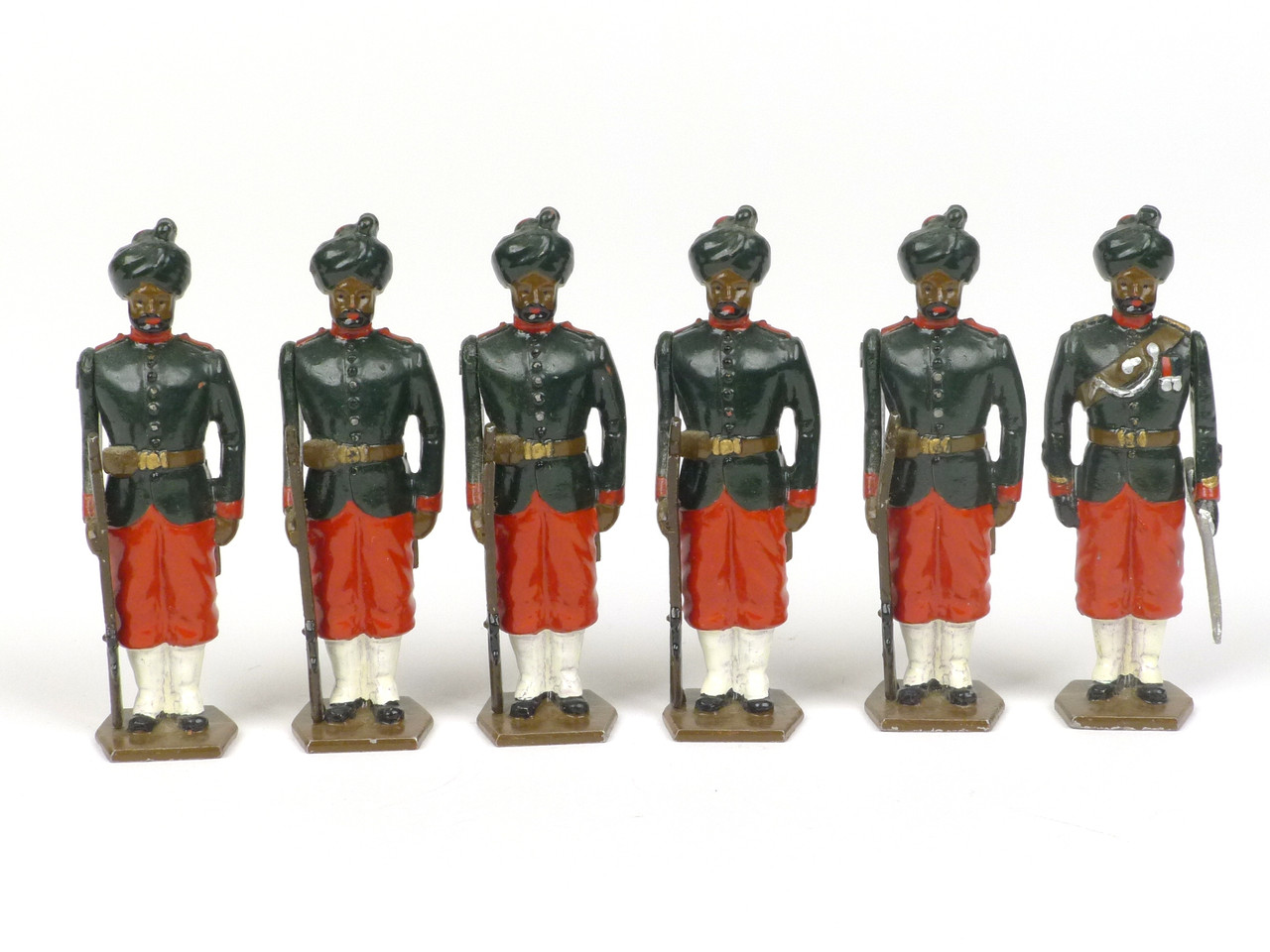 Below is an excerpt from an article about the roots and evolution of Tradition of London:

The name Tradition of London has been synonymous with collectable toy soldiers for more than six decades. The story began in the 1950s when industry legends Roy Maitland and Charles Stadden began sculpting masters, producing metal figures and creating a renewed buzz around the hobby worldwide.

Managed today by Swedish father and son Gunnar and Magnus Lindström, the business is alive and well and serving the global collecting community. Speaking to TSC’s George Phillips, Magnus reflects on the past, present and future of the enterprise imagine a small number of readers of this publication can still cast their minds back to the 1950s, when a legend in the toy soldier collecting hobby was born. Industry stalwarts Roy Maitland and Charles Stadden combined design and sculpting prowess with a passion for military history and the result was the introduction of a range of exquisite, hand-painted collectable toy soldiers.

Their initial output was swiftly snapped up by hobbyists and demand quickly grew for Tradition of London (ToL) figures. “Some years later the Tradition magazine was published to raise the profile of the company and the hobby with toy soldier and military miniature enthusiasts across the world,” explains the current owner of the enterprise, Magnus Lindström.

“A total of 76 issues were produced over the years and we have original and reprinted copies of many issues, along with a downloadable database of all the articles.” In the mid-1970s the ToL team opened a specialist toy soldier shop in Shepherd Street in the heart of London’s Mayfair. Within years, it had become a hub for the hobby, attracting foreign collectors and tourists travelling to the UK, in addition to hundreds of home-grown hobbyists. The products on offer included collectables figures from all major international conflicts in a range of scales including 25mm, 30mm, 54mm, 90mm and 110mm.

One of the overseas hobbyists who got wind of what was happening with Tradition of London was Anders Lindström, the uncle of Magnus. “My uncle Anders has been a model soldier collector and hobbyist from a very young and enjoyed painting figures and building dioramas. In the 1970s, a friend of his made him aware of Tradition and Roy Maitland and the two of them decided to travel to London to meet Roy. A friendship soon blossomed and Anders eventually became an agent for Tradition in Stockholm,” Magnus explains. In 1980, Roy Maitland offered to sell the 30mm ToL wargaming range to Anders.

After consulting with his brother Gunnar – Magnus’ father – Anders bought the range and Gunnar began to play a role in the enterprise. “My father and uncle also purchased the 25mm ToL range, along with the 30mm Willie series produced by talented sculptor, Edward Suren,” he says.

Buying the brand In 1987 Roy Maitland asked Anders and Gunnar if they wished to purchase the ToL brand and all its assets including moulds, castings and existing stock, along with the lease for the shop in Shepherd Street and the Tradition factory in Royston, Cambridgeshire. “My uncle and father were actually very honoured to be asked, such was their regard for the brand. So they purchased ToL, along with the Squadron 54 and 80mm ranges from Alan Caton

before the end of the year. I myself became more active in the business from around 2000. “The ToL shop was relocated for a while to another Mayfair address in Curzon Street but returned to Shepherd Street in 2003. “But by the end of 2012, it was clear that it was no longer economically viable to keep the shop open,” Magnus explains. “The moving van arrived at the beginning of 2013 and took everything to our headquarters in Väringgatan 9, Stockholm.

It was with sadness also that we had been forced to close the Tradition factory in 2009 in response to rapidly rising costs.”

“A lot of things have changed over the years but I believe it’s important for me to acknowledge the contribution of some of the people who have made ToL the success it still is today. From research, product development, sculpting, manufacturing and painting through to serving and advising customers in the shop, there so many people to thank. “These include Alan Caton, Alex Griffiths, David Scheinmann, Jeff Willis, Ron Cameron, the team at the Royston factory Andy Stadden and Steve Hare,” Magnus says. Tradition today Anders Lindström sadly passed away about a year after the move to Stockholm and today, Magnus works closely with his father in running the business.

In addition to the Lindströms, the talented lineup behind ToL includes sculptor Andy Stadden – son of Charles Stadden – who produces new figure masters; Bob Prati and his team at RP World Models who make moulds and produce model figures; ArtIG of Latvia, a toy soldier maker in its own right which provides high-quality painting support; and ToL sales lead for Sweden, Erik Lindmark, who shares his wealth of knowledge about Swedish military uniforms past and present. “In addition, we consult our historical advisors before designing and launching a new range. They use me as a conduit to relay the necessary information and reference data to our sculptor Andrew to ensure the figures are accurate.”

Perhaps not surprisingly after more than 60 years in business, ToL has a stock of no less than 10,000 different figures, painted or in the form of castings. “We like to listen to customers. If there is an old set or figure not in production in which customers show a lot of interest, then we will dust off the mould and put the figure in production. “We also have a large stock of masters for figures that have not been released to date.

We hope to release some of these over time, but we will also produce new master figures for all our series,” Magnus says. Customer base When I ask him to describe the geographical reach of the ToL customer base, Magnus gave me a two-syllable answer: “worldwide”. “Our customers are collectors and hobbyists, museums, military regiments, foundations, and the toy soldier clubs with which we’re associated.”

An example of a hobby club is Tennsoldatsklubben Carolinen, a Swedish association for tin fi gurine collectors. It was founded in 1975 and has just over 100 members spread all over Sweden with a further member based in Denmark.

“The purpose of the association is to work to spread interest in historical tin fi gures, stimulate the release of new tin figures in Sweden and to grow contacts with other associations and organisations,” Magnus explains. Sales channels “Our website provides a shop window to the world and is a key sales channel. But we also rely heavily on our trade agents and the shops around the world that carry our stock. And of course, ads and reviews in the leading hobby magazines are also important,” he says.

ToL also participates in some of the larger toy soldier shows around the world. Retired General Manager Steve Hare who has more than 40 years’ experience in the hobby will attend the London Toy Soldier Show on behalf of the company in December 2019. Why buy? I ask Magnus what values he thinks collectors associate with a long-established brand like Tradition. 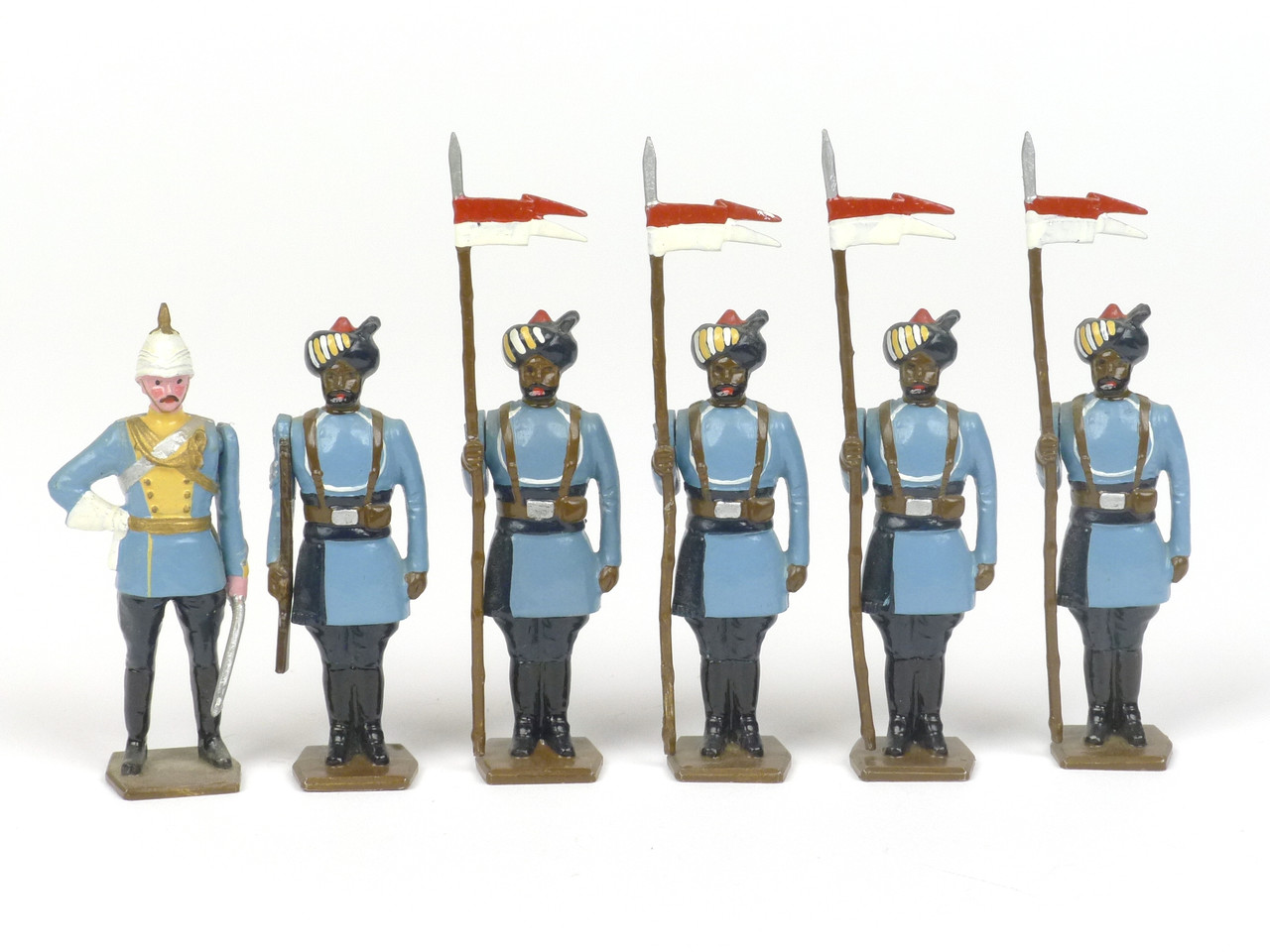 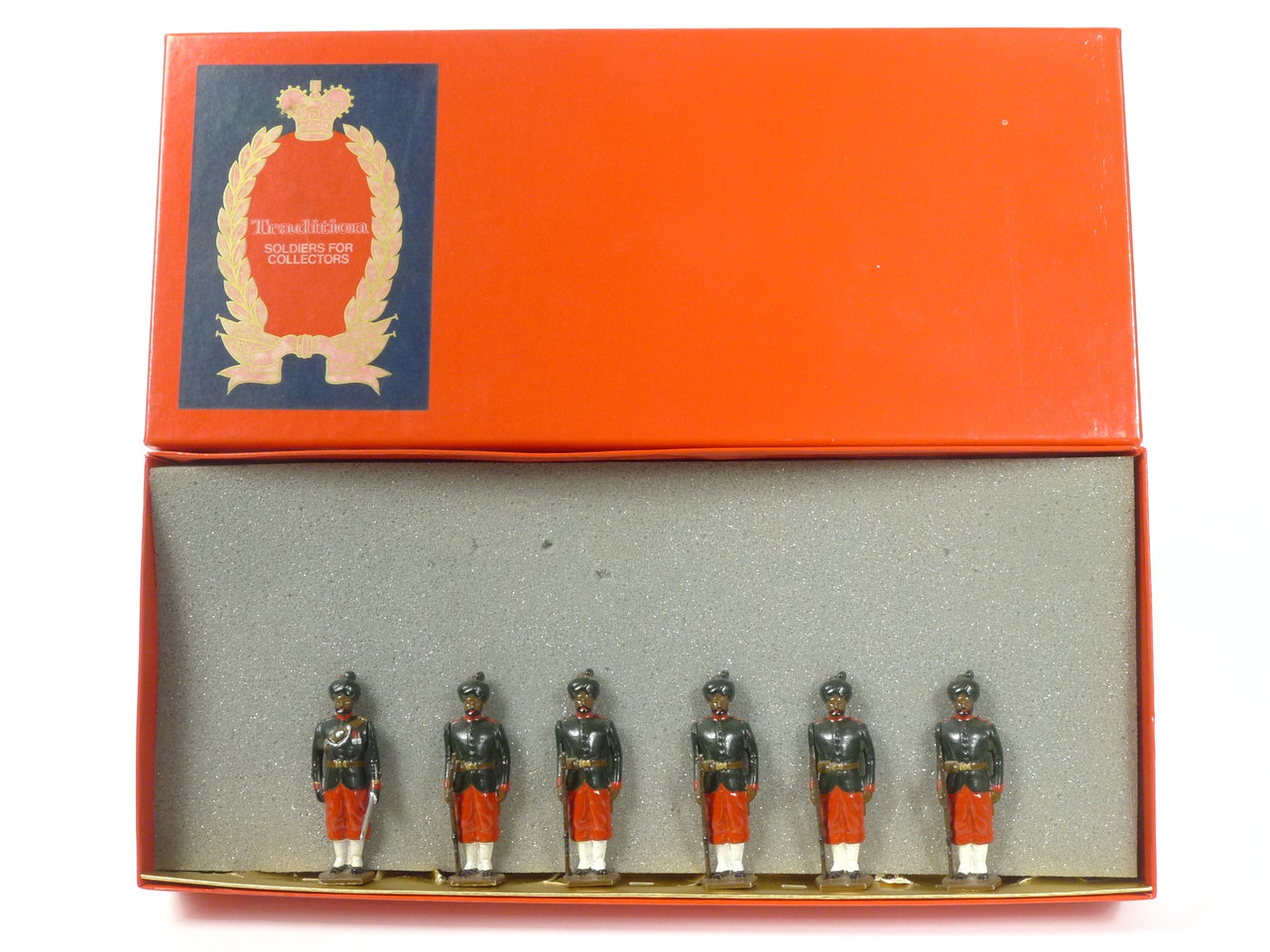 “My goal is that our customers feel confident that when placing an order with us, they will receive goods that fully match their expectations in terms of quality, which are well packed and delivered within a timeframe they’d expect from a toy soldier company whose products are handmade,” he says. “With a wide range of toy soldiers and model figures ranging in scale from 25mm to 150mm, in matte, gloss and unpainted finishes, I believe we have something for everyone.

Figures in 54mm depicting Napoleonic and World War I soldiers are our best-selling lines at the moment but who knows what will be the most popular next year?” Items in the production pipeline for ToL include a World War I Belgian armoured car and mounted Life Guards and Blues and Royals figures.

Though toy soldier collecting as a pastime has been decline in Sweden for some time, hobbyists are fighting back with some creative ideas to increase its appeal to new collectors. “By invitation of the owner of the Toy Museum Bergrummet at Skeppsholmen in Stockholm, we are able to demonstrate the casting of metal toy soldiers using historic moulds made back in the 1890s.

These activities have proved fascinating to young children and adults alike who are also able to participate by painting the castings. The moulds we use are some of the remaining viable ones from the old Swedish firms Santesson, CC Ohlsson and Mars. “I believe this gives us a unique opportunity to reach out to new, or possible future collectors,” Magnus says. 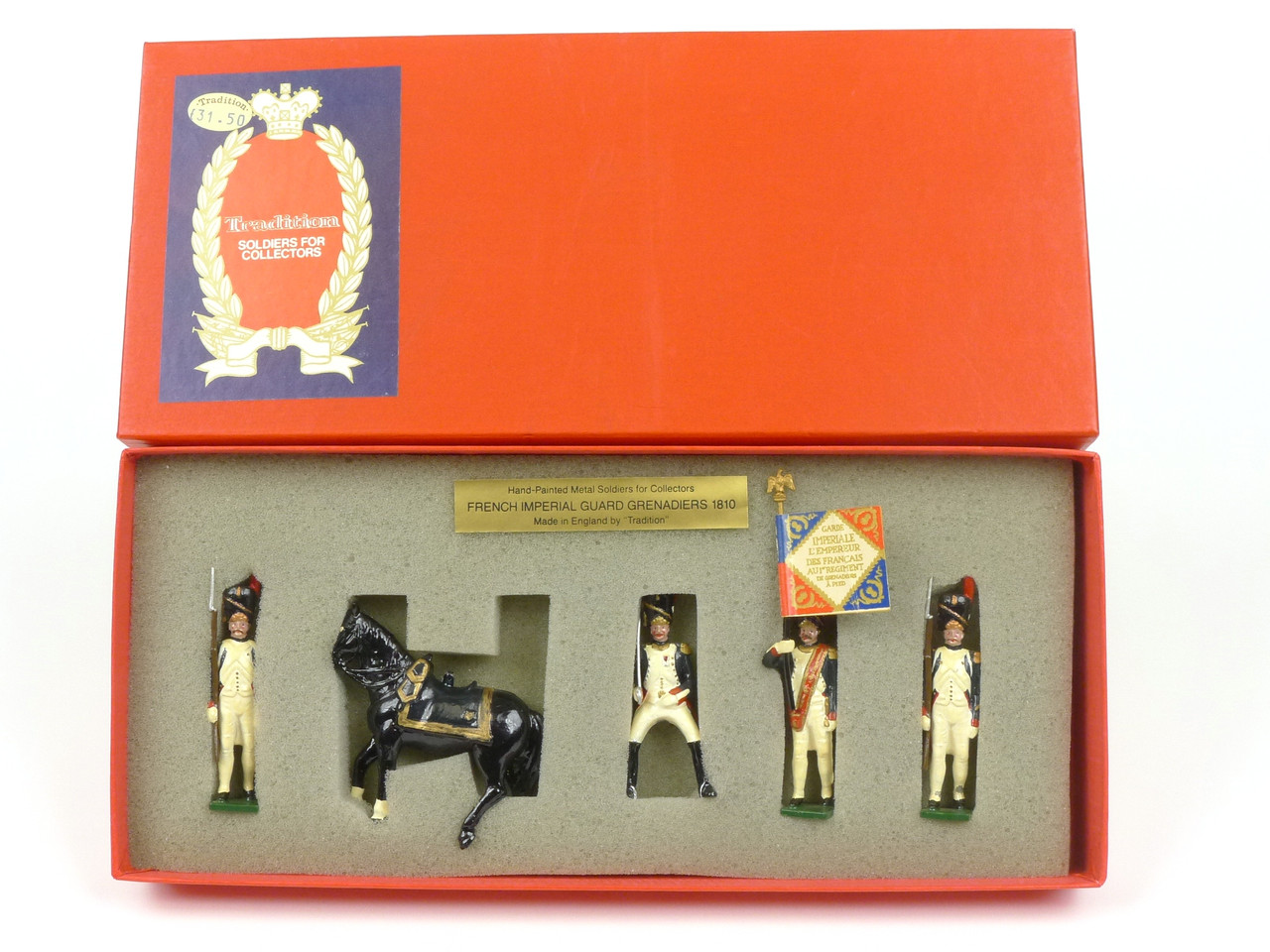 Don’t miss out on some of Tradition of London’s exceptional toy soldier figures, available online at Trains and Toy Soldiers!