Vintage CBG Mignot toy soldiers and figurines, especially those from the mid-twentieth century, are some of the most desire items collectors are searching for. Today's CBG Mignot is doing a very loyal and beautiful job in carrying on the prestigious Mignot name, but the highly collectible toy soldiers made by Mignot from the last century are often difficult to find.

The reason why is clear: Mignot, founded in Paris in 1825, quickly developed a reputation for its beautifully painted and exquisitely detailed lead soldiers. With a reputation for excellence spanning nearly 200 years, Mignot toy soldiers and figurines have become some of the most sought-after collectibles looked for in stores selling toy soldiers in the U.S. and around the globe. 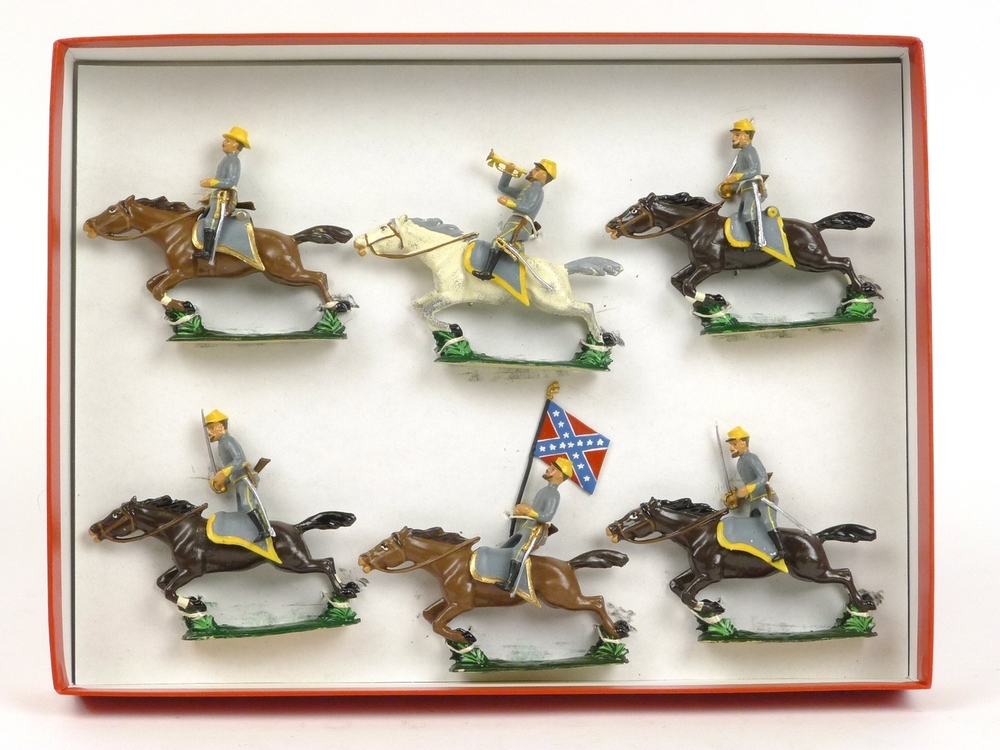 If, like other discerning collectors, you're one of the many searching for the hard-to-find Mignot Prussian Light Infantry set in the original box, Trains and Toy Soldiers carries that set and many other vintage CBG Mignot items, but only until they are gone! Vintage CBG Mignot miniatures are in great demand by collectors everywhere.

Mignot first began making small numbers of toy soldiers out of lead in 1838. This Parisian company put a great deal of detail into the figures, carefully and painstakingly painting these 2 inch tall figures with brightly-colored uniforms. They were exquisite and well worth their high price.

There is a small error seen on some websites regarding the founding of the company. One reads: "C.B.G. MIGNOT founded in Paris, 1785."

The reality is, from the CBG Mignot website, they were "Founded in 1825 in Paris and established in Anjou since 1994, CBG Mignot has been continuing the great tradition of lead soldiers for nearly two hundred years." That should clear up any misconceptions about their founding. Further on in this article, you will understand where the 1785 error came from.

For true artisans, the more you do something, the better you become. This certainly rings true when applied to vintage CBG Mignot figures, and indeed, even today, their figures are some of the finest pieces dedicated collectors of historic military and period figures could ever enjoy.

Each figure was and still is cast separately, mounted and then carefully painted by hand, following in the same traditions used by the forebears of today's artisans. This means that each piece is an original, unique in some particular way, even though more than one is made from each cast.

The company was originally founded by two men, Messrs. Cuperly and Blondel, who initially manufactured trinkets and children's toys. The company was later run by Sosthène Gerbeau, who married a Cuperly lady, and after that, it was run by his son, Maurice. They branched out into the manufacture of lead soldiers in 1838. Before long, they were known all over the world, winning many awards at the Expos of 1878, 1889 and 1900, and many other awards, as well.

Henri Mignot partnered with Maurice Gerbeau in 1903, buying him out in 1917. He ramped up the production of lead soldiers, and an untold number of children played with these exquisite miniature armies, gorgeously presented in beautiful red boxes throughout the period, between 1900 and 1930.

The CBG initials entered company history in 1928, when the company changed the name to "Établissements C.B.G " (Establishments C.B.G.), with the initials of the founders, Cuperly, Blondel and Gerbeau. This was when they purchased Lucotte House, founded in 1785, prior to the French Revolution. Hence the error mentioned above regarding their founding.

Production of these beautiful and highly popular hand-painted lead soldiers continued until the death of Henri Mignot in 1965, when his daughter, Mrs. Bontemps, took over the company. Then, in 1976, the company was taken over by Rémanences. Unfortunately, the vision of the management through this period was not enough to keep it going, and the factory closed in 1992.

Fortunately for the collector, that is not the end of the story!

The same year production ended, Edouard Pemzec, a recently retired industrialist and very committed collector of CBG figurines could not imagine the disappearance of more of these beautifully crafted miniatures. Relaunching the company in 1994, he once again focused on the manufacture of miniature lead soldiers. Collectors around the globe responded with such overwhelming enthusiasm that the company was a roaring success, leading to its becoming what it is, today, with only a bright future ahead.