W. Britain Limited, often seen simply as Wbritain or Britains, is the most famous of all the toy soldier companies. Since its beginning in 1893, this UK toy company has operated under a number of names, including William Britain, Britains, W. Britain and Petite. But William Britain wasn't always a toy soldier maker.

In fact, William Britain Senior started out as a brass clock maker. Clock making, itself, was a fascinating trade that required great skill, attention to detail, and above all, a passion for exactness. There is no room for good enough in clock making! 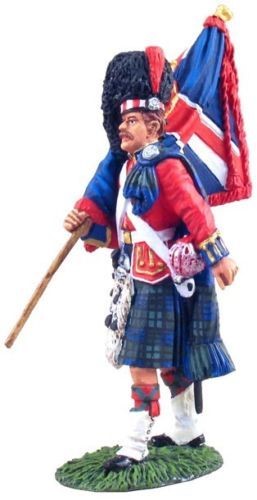 Up until W. Britain discovered how to master the hollowcast toy soldier process in 1893, Germany was the main source of hollowcast figures. Hollowcasting is a very special process, where molten lead is poured into a cast, then before it cools, some of the lead was poured back out after the outer layer hardened enough. This makes the toy soldier hollow, light and most important, much cheaper to produce.

W. Britain took the process used by German toy soldier manufacturers and, with his attention and passion for accuracy and detail, was able to take the process to a new and very profitable level. Because his toy soldiers used so much less metal, he was able to sell them at a much lower price than his German counterparts, while still making a good profit.

Since that time, the hollowcast toy soldier continued to grow and gain in popularity. The only time W. Britain's production has slowed or stopped was during the world wars, when metal became scarce due to its demand for the war effort.

From the end of the Second World War until the 1950s, W. Britain continued with very little change until they noticed the way plastic figures from companies like Herald were catching on. In fact, they bought out Herald in 1959. By 1966, with plastic completely dominating the toy soldier business, W. Britain ceased production of metal hollowcast figures.

From the late sixties to the early eighties, W. Britain manufactured toys, including space and farm toys, and plastic toy soldiers.

While they had produced a diecast metal Scots Guard toy soldier set in 1973, the weapons had been plastic, but in 1983, they once again decided to launch full metal, diecast figures. The 1983 figures portrayed the nostalgia of years gone by and proved to be very attractive for the tourist trade in the UK. The first runs featured Life Guards, Camerons, Black Watch and Yeoman. They were so popular that Britains began to focus more on their Metal Models range.

It was right about this time, in 1984, that the Britains company sold for the first time. The owner at that time, Dennis Britain, decided to retire. When no family member wanted to take over the business, it was sold to the Dobson Park Group, who changed the name to Britain Petite Limited in 1986.

Up until 1987, the Metal Models were included in the company's main catalog. Then the decision was made to give them their own, four page collectors' catalog, as they were more popular as collectible toy soldiers than simply as toys. Over the following years, the metal toy soldiers became so popular with toy soldier collectors that in 1993, in celebration of the W. Britain centenary, the W. Britain Collectors Club was launched. This exclusive club now has thousands of members around the world and features quarterly magazines, catalogs, special discounts, new collectibles for club members only and updates on anything and everything to do with W. Britain toy soldiers.

US farm toy manufacturer, Ertl bought the company in 1997, mainly for the farm series. In 1999, Ertl, along with W. Britain, was bought out by the much larger US toy company, Racing Champions. Under Racing Champions, all production was moved to Asia, ostensibly to increase quality, while keeping costs down. The glossy figures that W. Britain had been famous for during their 100 year history began to change to the newer matt painted finish.

Racing Champions decided to move away from high investment in time and effort involved in producing collectible toy soldiers, and in mid 2005, sold W. Britain toy soldiers to the much smaller, family-owned US collectible diecast vehicle manufacturer, First Gear.

First Gear, like W. Britain's founder, William Britain, dedicated themselves to the same kind of high quality and attention to authentic in all their diecast creations. They released half a dozen new ranges in 2006 of the very highest quality, returning the W. Britain lines to their glory days of excellence with a major improvement in every detail, from sculpting to painting. A great deal of research has gone into every figure, making them historically accurate down to the finest detail.

The Good Soldier LLC of Holland, Ohio, owned by Ken Osen and his wife Ericka, purchased W. Britain in 2016. Ken was creative director and general manager of the W. Britain brand when it was owned by First Gear.

All of the research, master sculpting, master painting and master molding is done by Ken Osen or one of a very elite group of contractors they employ in the US and Europe. Production is then done in China, allowing them to produce high quality collectibles at affordable prices for consumers.

Because W. Britain is now owned and operated by collectors, who themselves require high quality and authenticity, W. Britain toy soldiers continue the legacy of pure excellence and authenticity. After all, this is the very nature of the owners as collectors, themselves! Furthermore, the entire creative team for W. Britain from First Gear has moved over with the company, which ensures that the quality of their toy soldiers and figures will faithfully continue under The Good Soldier LLC.

Trains and Toy Soldiers has a very extensive collection of W. Britain figures and welcomes visitors. We love to talk about our collectibles!