Last weekend I attended the West Coaster Toy Soldier Show in Garden Grove, California just minutes away from the “Happiest Place on Earth- Disneyland!” But last weekend the happiest place on Earth for me was being at this show. The West Coaster is the largest Toy Soldier Show on the West Coast and attracts buyers and sellers from around the world specializing in new and antique military miniatures. I look forward to going to this show all year long and have been attending this convention for the last 20 years. I love the new location at the Wyndham Hotel which has plenty of free parking and easy access to the convention hall. There are numerous restaurants within walking distance from the hotel and a shuttle which takes hotel guests to the Disneyland and California adventure theme parks.

Room trading started Thursday afternoon with a handful of dealers opening up their rooms to offer their wares for sale. I went after work with a wish list of items I was hoping to find at this show. This list included Zulu and American Civil War figures from Frontline. Room Trading is such a nice way to get to know other fellow toy soldier manufacturers and enthusiasts. The atmosphere is relaxed and friendly and the bartering starts off a long weekend of buying and selling.

One of the first rooms I visited was that of Larry Simons of March Through Times. Larry manufactures 1/30 scale American Civil War and World War 2 US Marines sculpted by Chris Munro which matches up beautifully with King and Country Figures.

Larry also had a wide variety of toy soldiers from different manufacturers and I was lucky enough to have found some items that I was looking for including a box of Frontline ACW Union artillery and a box of Zulu War 24th foot British infantry.

Room Trading continued Friday and Saturday with most of the vendors being fully set up by Saturday afternoon. When I go to a show I like to look for items that are a bit out of the ordinary. 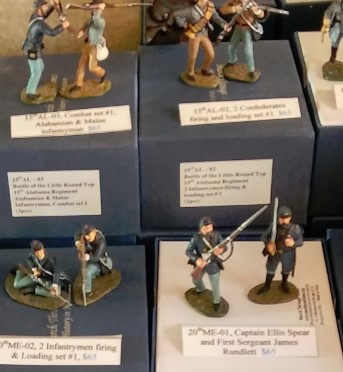 Part two of this blog will be posted soon.