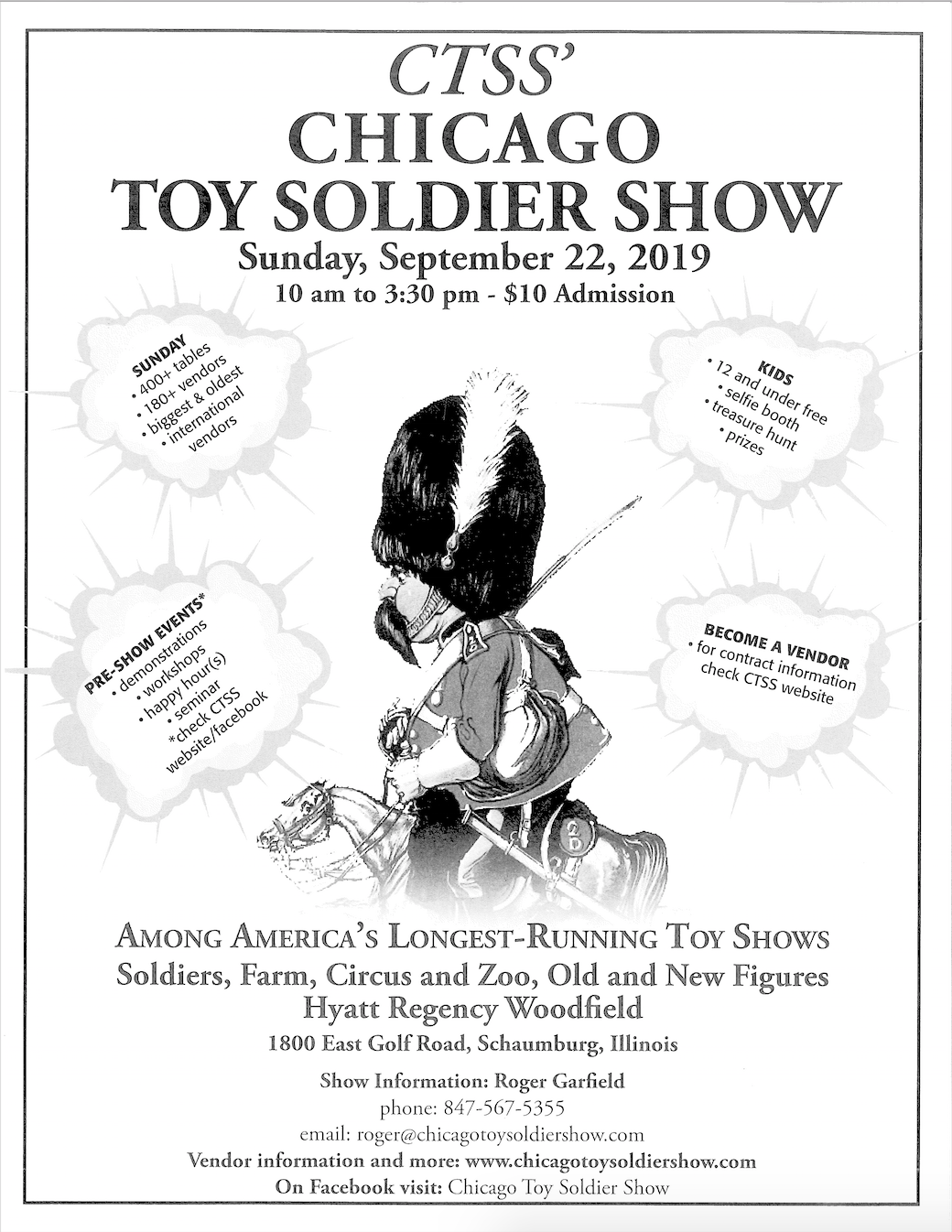 Buyers, collectors, and sellers gather to buy, exchange, introduce, sell, trade, and view toy soldiers, both new and old. It's common to meet and talk with people from all over the world.  Manufacturers are also in attendance with new products and products in the making. Among the items available are toy soldier figures (in plastic and metal), dioramas, backdrops, and military vehicles including ships, tanks, canons, trucks, buildings, and more.

The Chicago Toy Soldier Show premiered in 1980 as a spinoff of the hobby publication, Old Toy Soldier Newsletter (OTSN), which began publication in the mid-1970s. The five founding OTSN partners - Steve and JoEllen Sommers, Joe Wallis, Don Pielin, and Roger Garfield - envisioned a publication dedicated solely to the toy-soldier-collecting hobby. Collectors were enthusiastic about the venture and suggested a show of their own.

When first founded, the show was primarily a showcase for vintage and antique toy soldiers and related items. As the hobby evolved, manufacturers began to produce toy soldiers in the manner of the original toys. More recently, manufacturers began to produce exquisite model figures that are detailed and not intended for use as toys. Today, visitors to the Chicago Toy Soldier Show will see vintage and antique toys, original toys that are compatible with the old toys, and reproductions cast from the same molds as the original toys. There is also an array of exquisitely detailed models that are made to be admired rather than played with. Because of its longevity and size, the Chicago Toy Soldier Show has also become a trade show; many manufacturers will debut new lines and products.

Visitors to the show will find toy soldiers made of metal, plastic, composition, paper, and other materials. There are toy soldiers for every taste and every budget. More information on the show can be found on the Chicago Toy Soldier Show website here.

Trains and Toy Soldiers has been participating in the Chicago Toy Soldier Show for 7 years and has been a co-sponsor for 3 years. Ask any of the old timers who have been around from the beginning and they will tell you, with a chuckle, "Trains and Toy Soldiers is just a pup." Pups do gain experience (as a rule) and knowledge (hopefully) as time goes by. Hope to see you at the show.