We have more exciting John Jenkins Designs releases, including the 54th Regiment Massachusetts Volunteer Infantry from the American Civil War. Learn more about the 54th Regiment with us this week in the Trains and Toy Soldiers history and product spotlight!

The regiment's first battlefield action took place in a skirmish with Confederate troops on James Island, South Carolina, on July 16. The regiment stopped a Confederate assault, losing 42 men in the process. The regiment gained recognition on July 18, 1863, when it spearheaded an assault on Fort Wagner near Charleston, South Carolina. 270 of the 600 men who charged Fort Wagner were "killed, wounded or captured." At this battle, Colonel Shaw was killed, along with 29 of his men; 24 more later died of wounds, 15 were captured, 52 were missing in action and never accounted for, and 149 were wounded. The total regimental casualties of 270 would be the highest total for the 54th in a single engagement during the war (Wikipedia). 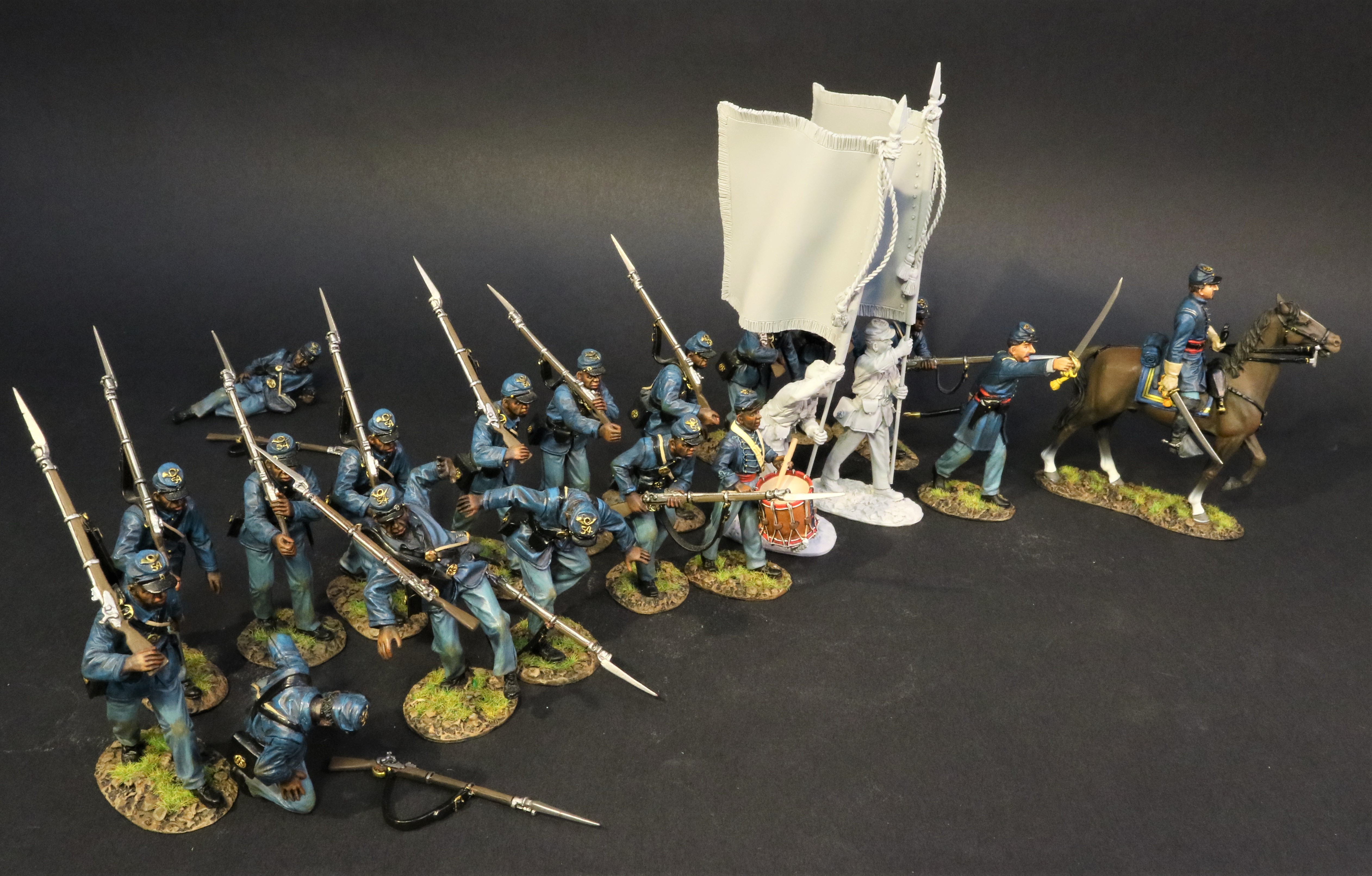 Although Union forces were not able to take and hold the fort (despite taking a portion of the walls in the initial assault), the 54th was widely acclaimed for its valor during the battle, and the event helped encourage the further enlistment and mobilization of African-American troops, a key development that President Abraham Lincoln once noted as helping to secure the final victory. The service of the 54th Massachusetts, particularly their charge at Fort Wagner, soon became one of the most famous episodes of the war, interpreted through artwork, poetry, and song. More recently, the 54th Massachusetts gained prominence through the award-winning film Glory (Wikipedia).

One exceptional soldier in the 54th Regiment was William H. Carney.

During the battle [at Fort Wagner,] Shaw was pinned down beneath the parapet of the fort and was desperately trying to rally his men forward. As Shaw and the flag bearer were mortally wounded and began to fall, Carney seized the colors and prevented the flag from touching the ground. He struggled up the parapet and, though wounded in the legs, chest, and arm, planted the colors at the top of the parapet. Despite his wounds and the heavy gunfire around him, Carney was able to keep the flag aloft. Carney and the rest of the 54th Massachusetts remained pinned down. Only after reinforcements arrived was the beleaguered and decimated unit able to withdraw. Struggling back to Union lines while still carrying the colors, Carney collapsed saying: “Boys, the old flag never touched the ground.”

After the battle Carney was discharged from the infantry due to his wounds. For his act of heroism at Fort Wagner, Carney was awarded the highest military honor, the Congressional Medal of Honor. Carney was the first African American to receive this award. Upon his death in 1908, the flag at the Massachusetts state house was flown half mast in his remembrance, an honor usually given only to a deceased governor, senator, congressman, or US President.

Not everything was glorious for the men of the 54th Massachusetts, however. The enlisted men of the 54th were recruited on the promise of pay and allowances equal to their white counterparts. This was supposed to amount to subsistence and $13 a month. Instead, they were informed upon arriving in South Carolina that the Department of the South would pay them only $7 per month ($10 with $3 withheld for clothing, while white soldiers did not pay for clothing at all). Many of the soldiers, encouraged by Colonel Shaw, immediately began protesting the measure by fighting for 18 months for no pay whatsoever (Black Past).

Refusing their reduced pay became a point of honor for the men of the 54th. In fact, at the Battle of Olustee, when ordered forward to protect the retreat of the Union forces, the men moved forward shouting, "Massachusetts and Seven Dollars a Month!" On September 28, 1864, the U.S. Congress took action to pay the men of the 54th retroactively (Wikipedia). 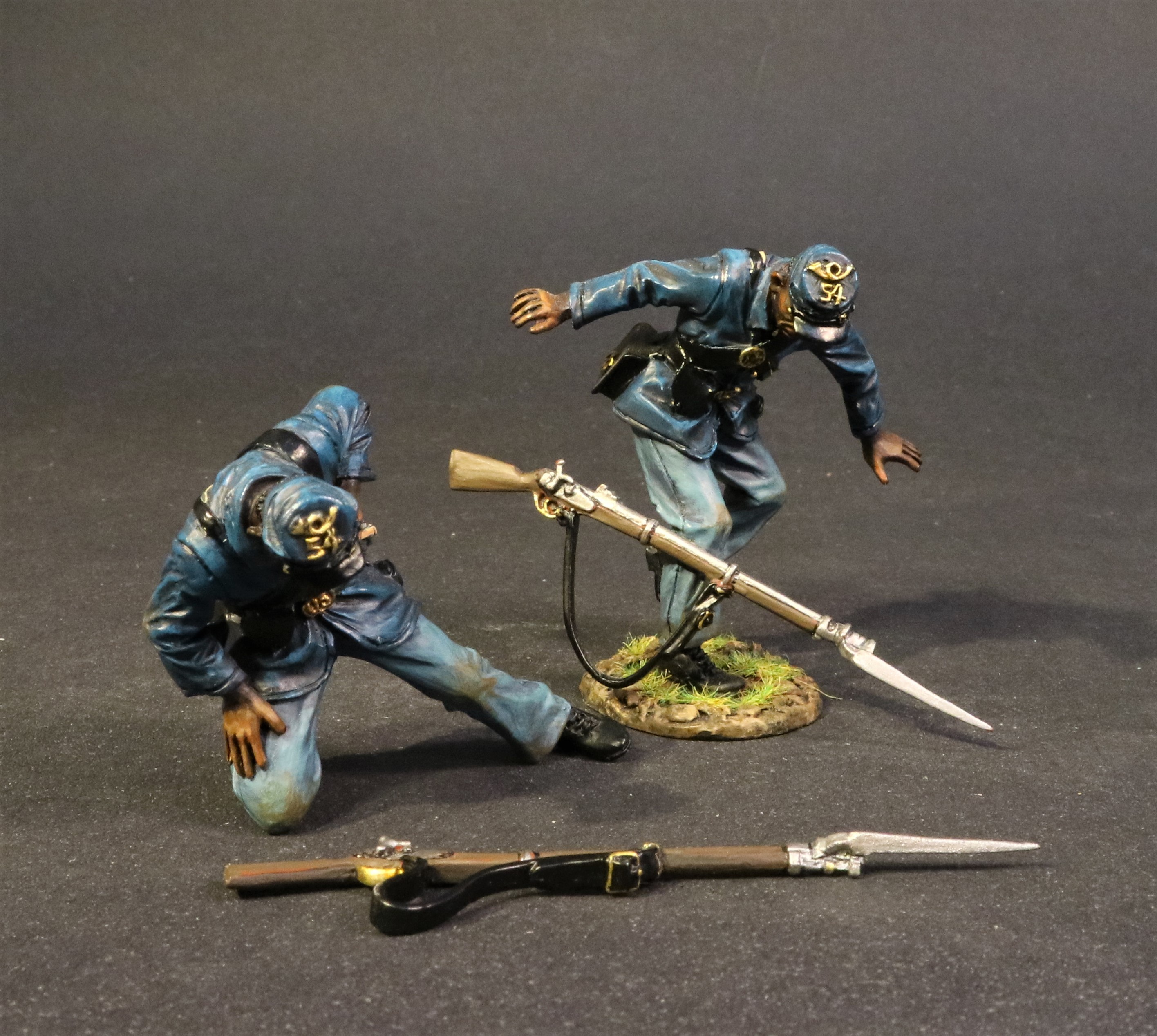 Nearly 180,000 free black men and escaped slaves served in the Union Army during the Civil War. At first they were denied the right to fight by a prejudiced public and a reluctant government, and “even after they eventually entered the Union ranks, black soldiers continued to struggle for equal treatment. Placed in racially segregated infantry, artillery, and cavalry regiments, these troops were almost always led by white officers” (CRF). Combat for both black soldiers and their white officers was doubly dangerous. When captured by the Confederates, black captives could be returned to their previous owners, sold into slavery, or even hanged. Their white officers were considered “outlaws” and might be executed upon capture, rather than kept and treated as prisoners of war (CRF).

“Despite their proven record as effective, courageous combat troops, African-American men still faced a long struggle for equal treatment. During the Civil War, black troops were often assigned tough, dirty jobs like digging trenches. Black regiments were commonly issued inferior equipment and were sometimes given inadequate medical treatment in racially segregated hospitals. African-American troops were paid less than white soldiers. Some black units, such as the 54th Massachusetts Infantry, refused to accept any pay as long as the rate remained unequal. The Lincoln administration and Congress dragged their feet on this matter until they finally established equal pay near the war’s end” (CRF).

“Other inequalities plagued black troops. Few African Americans were commissioned as officers and black troops remained in segregated units throughout the Civil War. In fact, African-American troops were not integrated with their fellow Americans until the Korean War nearly 100 years later.

Despite the inequality, the black troops in Union blue had proven themselves to be courageous, effective soldiers. Black soldiers, including more than a dozen Congressional Medal of Honor winners, fought in 449 Civil War battles. More than one-third of them died during the war. Through their courage and sacrifice, these black men helped press the African-American fight for equality” (CRF).