2017 was a great year for Trains and Trains and Toy Soldiers and we expect 2018 to be even better. We will be traveling across the country attending electric model train show and military miniatures and toy soldiers show. Once again, our family company will be sponsoring the Chicago Toy Soldier Show which is scheduled this year for Sunday, September 23, 2018 at Hyatt Regency Schaumburg. The Chicago Toy Soldier Show is still one the largest and most enjoyable toy soldier show in the entire world and Trains and Toy Soldiers enjoys being part of the experience. 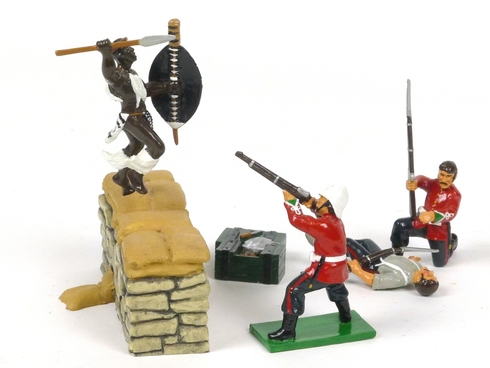 Each year Trains and Toy Soldiers learns more about the long and rich history of our shared hobby. There is so much to learn from the earliest toy soldiers produced in Europe to the hollow cast revolution at the turn of the 20th century to the rise of plastic toy soldiers after World War II. After the rise of action figures in the later part of 20th century, the nostalgia for the toys of 1940’s and 1950’s increased and the companies that had not manufactured any metal toy soldier in decades began to produce new units and a new generation of toy soldier makers began creating and selling toy soldiers. Trophy of Wales, King and Country, John Jenkins Designs, Old Northwest Trading Company, and later Thomas Gunn have brought a new generation of highly detailed metal 60mm toy soldiers.

Trains and Toy Soldiers is dedicated to have the largest selection of classic toy soldiers and all the newest releases from your favorite current brands such as Thomas Gunn, John Jenkins, Conte Collectibles, and WBritain. Toy Soldier have become more than hobby. They have become a collection of world class artist across the world constantly challenging each other to produce the most dynamic and detailed toy soldiers ever. Trains and Toy Soldiers is excited to help you find these soldiers to add to your collection. If we can of any help, please contact us here or call us 1-800-786-1888.