Trains and Toy Soldiers has some exciting new John Jenkins Designs releases this September, especially in our Eighteenth Century Collection. Check out the toy soldier tab of our website, give us a call at 1-800-786-1888, or read on for more information about some of our latest additions! 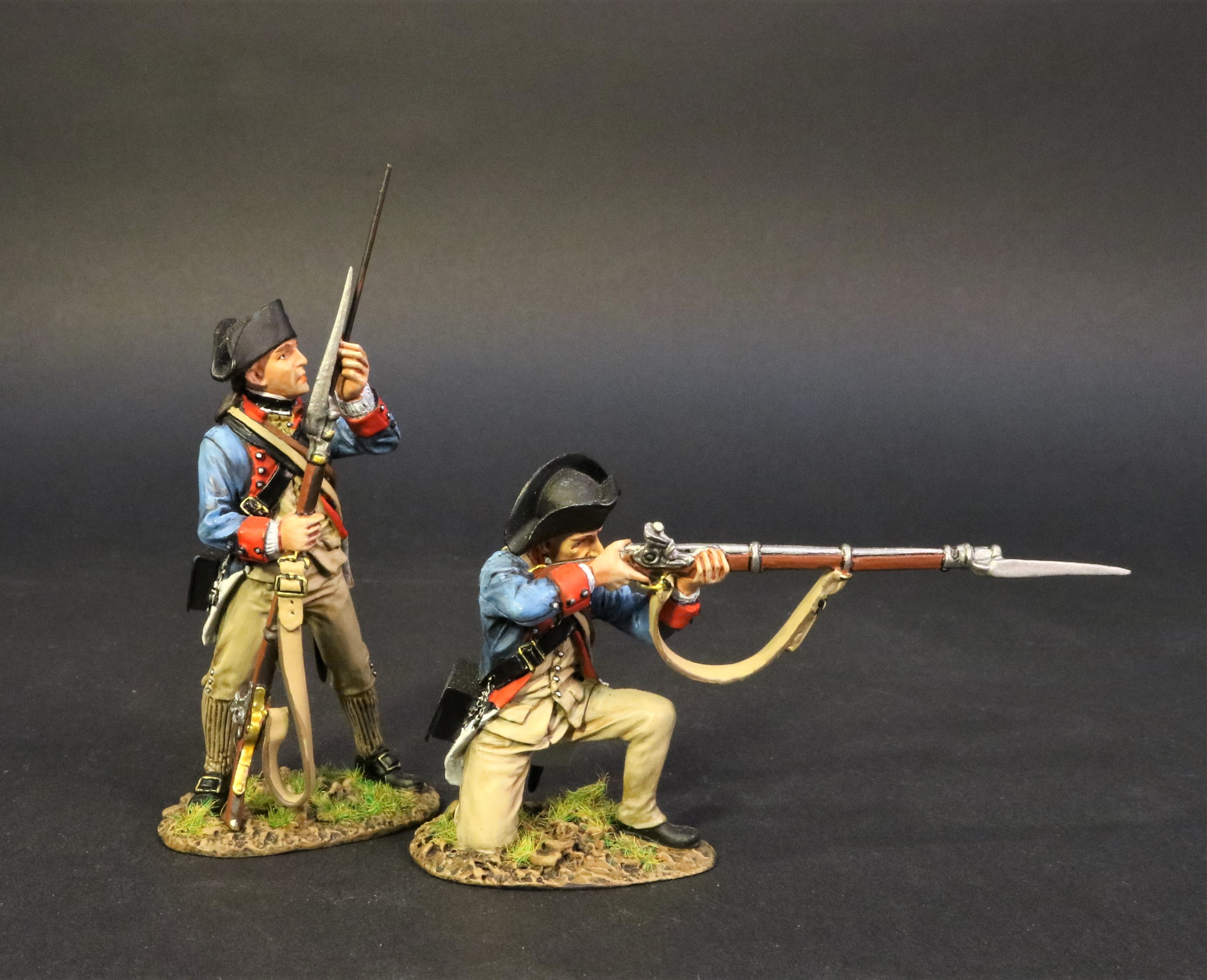 “The surrender that changed the world." In October 1777, a 6,000 strong British army surrendered in defeat after the American victory at the Battles of Saratoga. For the first time in history, a British General surrendered his sword.

John Burgoyne's strategy to divide New England from the southern colonies started well but slowed due to logistical problems. Burgoyne won a small tactical victory over General Horatio Gates and the Continental Army in the September 19 Battle of Freeman's Farm, but at the cost of significant casualties.

The Continental Army was formed by the Second Continental Congress after the outbreak of the American Revolutionary War by the colonies that became the United States of America. Established by a resolution of Congress on June 14, 1775, the Continental Army was created to coordinate the military efforts of the Thirteen Colonies in their revolt against the rule of Great Britain. The Continental Army was supplemented by local militias and troops that remained under control of the individual states or were otherwise independent. General George Washington was the commander-in-chief of the army throughout the war.

The Continental Army consisted of soldiers from all 13 colonies and, after 1776, from all 13 states. When the American Revolutionary War began at the Battles of Lexington and Concord on April 19, 1775, the colonial revolutionaries did not have an army. Previously, each colony had relied upon the militia, made up of part-time citizen-soldiers, for local defense, or the raising of temporary "provincial regiments" during specific crises such as the French and Indian War of 1754–63. As tensions with Great Britain increased in the years leading to the war, colonists began to reform their militias in preparation for the perceived potential conflict. Training of militiamen increased after the passage of the Intolerable Acts in 1774. Colonists such as Richard Henry Lee proposed forming a national militia force, but the First Continental Congress rejected the idea.

The Continental Army of 1777–80 evolved out of several critical reforms and political decisions that came about when it became apparent that the British were sending massive forces to put an end to the American Revolution. The Continental Congress passed the "Eighty-eight Battalion Resolve," ordering each state to contribute one-battalion regiments in proportion to their population, and Washington subsequently received authority to raise an additional 16 battalions. Enlistment terms extended to three years or to "the length of the war" to avoid the year-end crises that depleted forces (including the notable near-collapse of the army at the end of 1776, which could have ended the war in a Continental, or American, loss by forfeit).

The 2nd New Hampshire Regiment was formed in early May 1775, as the second of three Continental Army regiments raised by the state of New Hampshire during the American Revolutionary War. Its first commander was Colonel Enoch Poor, with Joseph Cilley as major. Many of the men who served in the unit hailed from southeastern New Hampshire and western Maine (then part of Massachusetts).

After Enoch Poor was promoted to Brigadier, Nathan Hale was commissioned colonel of the 2nd New Hampshire Regiment in April 1777. 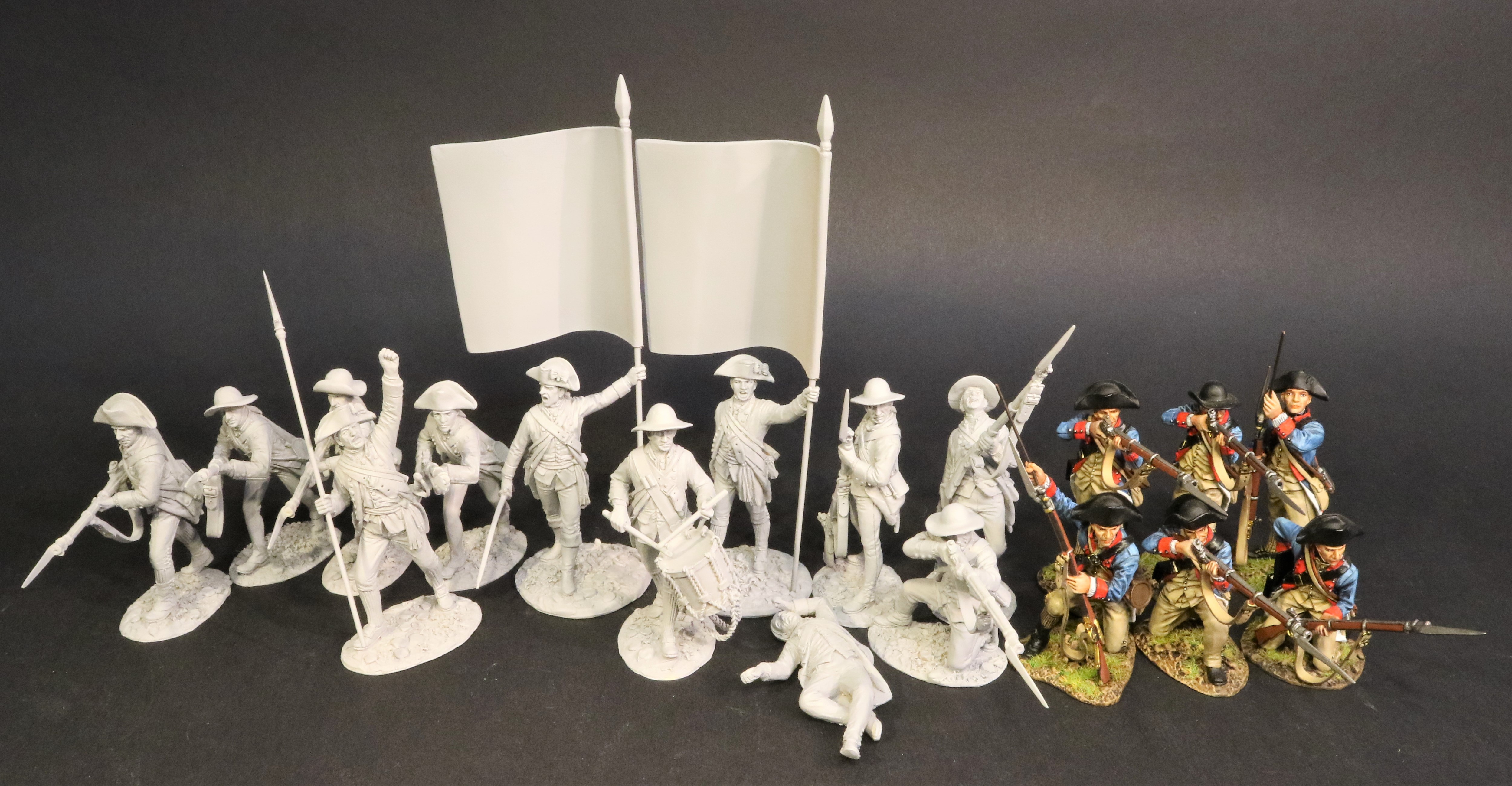 Flags or colors which belonged to the 2nd NH were captured at Fort Anne in July 1777 during the retreat from Fort Ticonderoga. After more than a century, they were returned from Britain, and are on display today at the Tuck Library of the New Hampshire Historical Society in Concord. They are among the only American battle flags from the Revolutionary War known to exist. The colors containing the motto "The Glory Not the Prey" are marked "2nd NH Regt," while the other colors captured at the time, the linked 13 rings, were likely a type of national color. Two other flags captured by the British at Skenesboro were also noted and they had similar designs, especially another with the 13 linked rings. While their colors were lost, the 2nd New Hampshire fought bravely in the autumn of 1777, where they were heavily engaged with British forces at Saratoga, leading to the surrender of General John Burgoyne's army.

The 62nd Regiment of Foot was an infantry regiment of the British Army, which was raised in 1756 and saw service through the eighteenth and nineteenth centuries. Under the Childers Reforms it amalgamated with the 99th (Lanarkshire) Regiment of Foot to form the Wiltshire Regiment1881.

In October 1756 a second battalion to the 4th Regiment of Foot was formed as part of measures to strengthen the army at the start of the Seven Years' War with France.

In January 1758 four companies of the 2nd/4th Regiment embarked at Plymouth as Marines under Major T Hardy in five ships of Admiral Boscawen's fleet while Battalion Headquarters and the remaining companies stayed at Plymouth. The fleet sailed for Halifax, Nova Scotia, the base for a seaborne attack on French Canada. However, on 21 April while the fleet was part way across the Atlantic came news of a change of name following an official decree that the new second battalions throughout the Army would be numbered as separate regiments. Under this re-organization the 2nd/4th Regiment became the 62nd Regiment of Foot.

Throughout the Canadian campaign the 62nd continued to serve as Marines, providing landing parties, manning ships' boats, putting artillery pieces ashore and providing local protection for them. During this time the Regiment won its first Battle Honor 'Louisburg' in 1758, but it was not awarded until 152 years later. The reason for this was that since they were employed on board ship the men were on the strength of the navy, not the army, so that at the time the War Office stated they had no record of the Regiment's participation!

We're excited to be growing our stocks and bringing new quality products to our community. Check out these toy soldiers and more at Trains and Toy Soldiers! Stay tuned for more information on our other new John Jenkins Design releases, including the Aztec Empire, Republican Romans and the Roman Army, the American Civil War, Saxon Fyrdmen, and more. 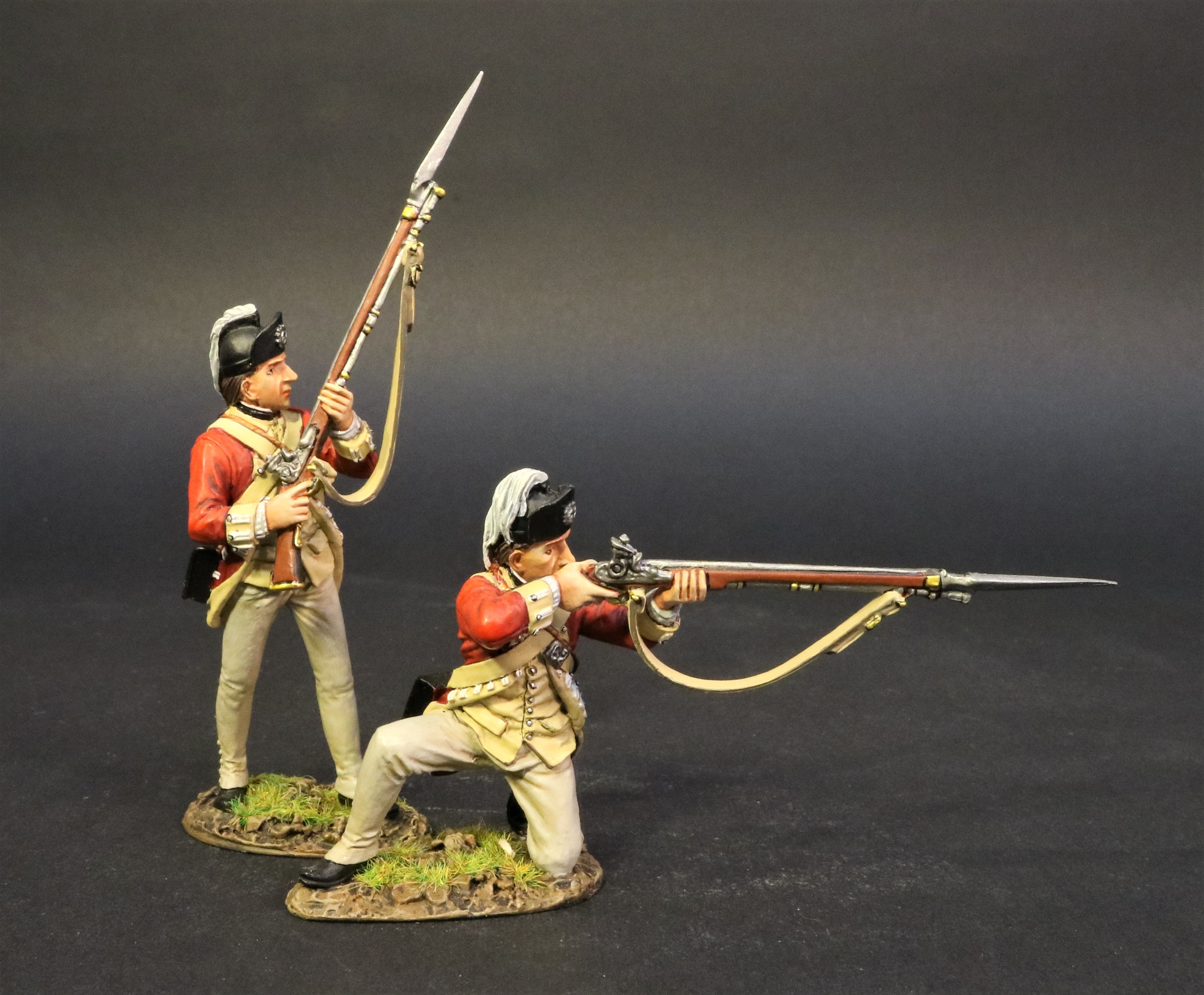