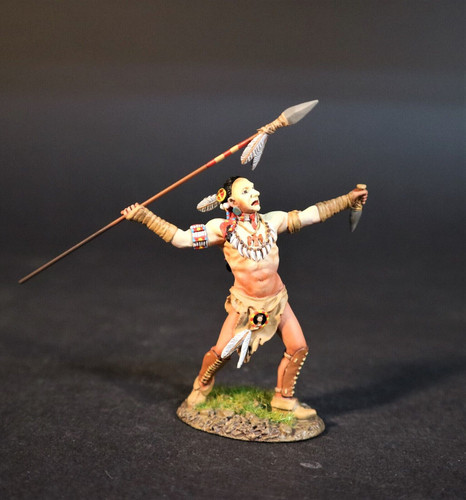 John Jenkins Designs SK-05 Beothuk Warrior, Skraelings. Skraeling is the name the Norse Greenlanders used for the peoples they encountered in North America, and Greenland. In the Viking Sagas, it is also used for the peoples of the region known as Vinland whom the Norse encountered during their expeditions there in the early 11th Century. The word Skraeling is most likely related to the old Norse word "skra", meaning "dried skin", which is believed to be in reference to the animal pelts worn by the Native Americans. The term is thought to have been first used by Ari Thorgilsson in his work called "The Book Of The Icelanders". The book was written well after the period in which Norse explorers made their first contacts with indigenous Americans. By the time of the book, Skraeling was probably the common term Norse Greenlanders used for the Thule people, who were the ancestors of the modern Inuit. The Greenlander's Saga and the Sago of Erik the Red, which were written in the 13th Century, use this term for the people of the area known as Vinland whom the Norse met in the early 11th Century. The word has subsequently become well known and has been used in the English language since the 18th Century. Probably the most likely local inhabitants of the area named as Vinland were the Beothuk, or at least their ancestors. The meaning of the word Beothuk is obscure, but "people" or "good people" are possibilities. They lived in villages made up of a number of cone-shaped houses called "Mamateeks". Unfortunately the Beothuk have since vanished, with the last of their tribe believed to have died in the 19th Century.
Ethnologists have recognized what are at least similarities between the Beothuk peoples and other still existing tribes native to North America, like the Algonquin Indians. This helps give us some insight into the Beothuk, their weapons and the way in which they lived.
This product hasn't received any reviews yet. Be the first to review this product!
Write a Review