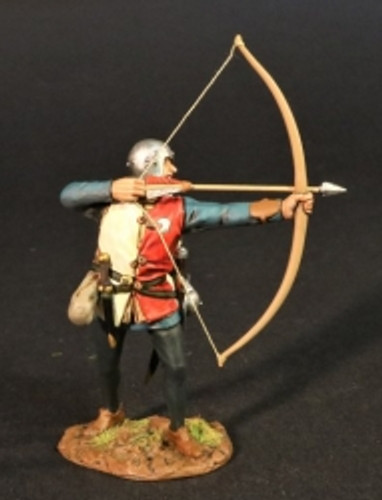 John Jenkins THYork-06 Archer Retinue Earl of Surrey Historical Figure. Like new in original box. Thomas Howard was an English nobleman, soldier and statesman who served four monarchs. He was the eldest son of John Howard, 1st Duke of Norfolk, by his first wife Catharina de Moleyns. The Duke was the grandfather of both Queen Catherine Howard and the great grandfather of Queen Elizabeth I. In 1513 he led the English to victory over the Scots at the decisive Battle of Flodden, for which he was richly rewarded by King Henry VIII, who was away in France at the time. King Richard III (2 October 1452 - 22 August 1485) was King of England from 1483 until his death in 1485, at the age of 32, in the Battle of Bosworth Field. He was the last king of the House of York and the last of the Plantagenet dynasty. His defeat at Bosworth Field, the last decisive battle of the Wars of the Roses, marked the end of the Middle Ages in England.

The Battle of Bosworth (or Bosworth Field) was the last significant battle of the Wars of the Roses, the civil war between the Houses of Lancaster and York that raged across England in the latter half of the 15th century. Fought on 22 August 1485, the battle was won by the Lancastrians. Their leader Henry Tudor, Earl of Richmond, by his victory became the first English monarch of the Tudor dynasty. His opponent, Richard III, the last king of the House of York, was killed in the battle. Historians consider Bosworth Field to mark the end of the Plantagenet dynasty, making it a defining moment of English and Welsh history.

By the time of the Wars Of The Roses, badges were of considerable importance. These along with the Livery Colours were closely associated with what was then known as Livery and Retaining (Bastard Feudalism). The badges were rarely worn by their owners, for they were marks of ownership. They were, however, worn by his servants, house-hold men, retainers, and probably temporarily by the adherents to his cause. So great and extensive was the use of these badges, that they were far more generally employed than the coat of arms. For where a man's badge would be common knowledge and bear some repute throughout the kingdom, few people would know what his coat of arms looked like.

In an effort to destroy Henry Tudor, Richard decided to leave his position on Ambion Hill, leading his household retainers down the slope, thundering towards Henry's men with levelled lances.
This product hasn't received any reviews yet. Be the first to review this product!
Write a Review