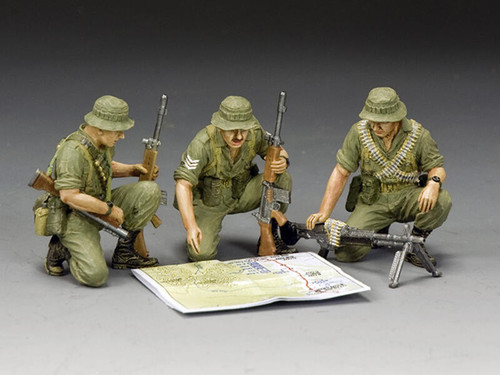 King & Country Toy Soldiers VN158 Patrol Briefing Set. This 3-figure set focuses on three kneeling and crouching Australian soldiers about to take part in a sweep around the base area outside of Nui Dat which was the headquarters of the 1st Australian Task Force in South Vietnam during the War. As the platoon sergeant goes over the map in front of him the two 'diggers' listen carefully to his instructions. As can be seen both the sergeant and one of the riflemen are carrying the standard L1A1 Self Loading Rifles while the third soldier rests his M60 Machine Gun on its bipod legs on the ground. In addition, one of the kneeling riflemen is also carrying an M79 Grenade Launcher. Each set also includes 3 x copies of the map. King & Country is a well-respected producer of metal collectable toy soldiers, civilian and military miniatures. Founded in 1983 by two partners, one of whom was a former Royal Marine Commando with a lifelong interest in toy soldiers and military models. Since then the company has grown into a major designer and producer of toy soldiers and miniatures including a wide variety of hand-painted, all-metal 1:30 scale military figures. The company also produces scale military vehicles, model buildings, aircraft and ships for the collectible figures and diorama market. The historical eras and subjects covered by King & Country's products are unparalleled in the world of toy soldier collecting and the company continues to grow producing some of the finest toy soldiers and scale military figures, structures and vehicles on the market today.
The company's best-selling series include "Streets of Old Hong Kong" which is a colorful series of Chinese buildings and figures showing street life in Colonial Hong Kong at the turn-of-the century, and several "World War Two" series with scale figures, buildings and military vehicles. The World War II series tackles subjects that stretch from the sands of North Africa to shores of Normandy. There is even a series dedicated to "Operation Barbarossa" the June 1941 German Invasion of Russia. Other series address topics as diverse as "The Imperial Army" of the Emperor of China, "The Age of Napoleon" and "The Crusades". Trains And Toy Soldiers carries King & Country toy soldiers, including a range of hand-painted metal toy soldiers, military figures, civilian figures, and polystone vehicles and accessories in 1/30 scale. Enhance your collection with a variety of high-quality King & Country metal toy soldiers and diorama supplies from Trains And Toy Soldiers. Established in 1984, King & Country is owned and operated by Andy Neilson and Laura Johnson. Based in Hong Kong, King & Country toy soldiers include a range of hand-painted metal toy soldiers, military and civilian figures, and polystone vehicles and accessories in 1/30 scale. Enhance your collection with a variety of high-quality King & Country metal toy soldiers, military vehicles and diorama supplies.
This product hasn't received any reviews yet. Be the first to review this product!
Write a Review