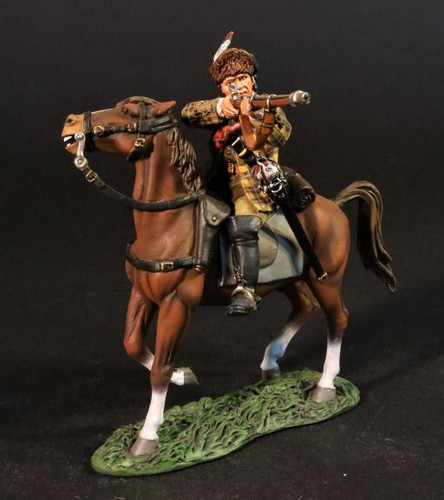 John Jenkins JRCAV-01 Bagot's Hussar, Jacobite Army, The Jacobite Rebellion 1745, Historical Figure. Like new in original box. It is argued that despite being depicted as horseless troopers standing forlornly in the rear at Culloden, the Jacobite cavalry were regarded when it came to scouting as superior to their regular opponents.
All of the Jacobite cavalry units remained mounted throughout the campaign, except for Kilmarnock's and Lord Pitsligo's who turned their horses over to the newly arrived Fitzjames Cavallerie in March 1746, and were then re-organized as a regiment of foot guards. The cavalry, with the exception of the single troop of Hussars, were organized into two troops, and were over-officered to an even greater degree than the infantry.
A single troop of 50 men raised in Edingburgh by John Murray of Broughton and officered by a group of Lothian gentry, were designated as Hussars. It is unclear why they were designated hussars a role until then unknown in Britain. Their clothing included a fur-trimmed hussar cap of obsolete French pattern. These caps were an obsolete style once worn by hussars in the French army, and were probably brought over from France, along with the Lifeguard blue coats.
As Murray of Broughton served on Charles' staff, the hussars were led by Captain George Hamilton of Redhouse until his capture at Clifton.
Bagot originally an officer in French service recognized that the unit would be ineffective in open battle and instead trained them to operate as light cavalry in the continental manner, and earned the respect of Cumberland's cavalry as a proficient reconnaissance unit.

In keeping with the rest of the Highland army, most Jacobite cavalry were dressed in Highland clothes of some description. The depiction of the Bagots's Hussars in their distinctive tartan coats and fur caps is based on the Pencuik drawings, and James Ray's description in his contemporary history of the Rebellion where he describes them as wearing "Plaid coats and huge fur caps".
Most Jacobite cavalry were armed with a firelock, which reflected their primary role as a scout and skirmisher.
During the battle of Culloden, the Hussars were positioned on the left wing, but a volunteer from the Lifeguards named John Daniel mentions they were later moved to the centre where they suffered heavy casualties. As they only numbered 26 troopers at the start of the battle, it is believed that at least half their strength was lost. One of the casualties was the unit's commanding officer, Major John Bagot, a regular officer in the French service, who was badly wounded.
This product hasn't received any reviews yet. Be the first to review this product!
Write a Review